He delighted fans when he lifted the Glitterball trophy in Saturday’s final.

But Strictly Come Dancing champion Kelvin Fletcher has revealed that show bosses didn’t tell him that Jamie Laing had been forced to pull out when they offered him a spot on the show.

Speaking on BBC Breakfast alongside his professional partner Oti Mabuse, the Emmerdale star, 35, said he was given just an hour to decide whether to accept the offer, after Jamie was forced to drop out of the show with a foot injury. 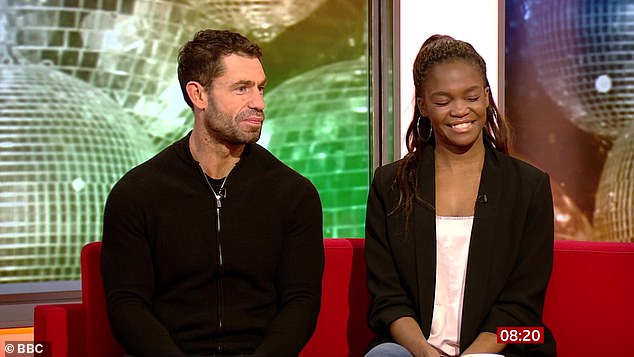 Surprising: Strictly Come Dancing winner Kelvin Fletcher has revealed that show bosses didn’t tell him that Jamie Laing had pulled out when they offered him a spot on the show

Reflecting on the moment that he and Oti were crowned Strictly champions, Kelvin said: ‘You don’t really expect that it’;s just the complete disbelief, when your name is read out the absolute disbelief?

‘I think I looked to Oti and went off her reaction, I don’t think I heard our names being read out and I saw Oti almost collapse.’

Kelvin was crowned the winner despite finishing in second place on the leaderboard behind CBBC presenter Karim Zeroual and pro Amy Dowden.

The actor joined the show at the last minute after Jamie injured his foot during the launch show, and was forced to drop out. 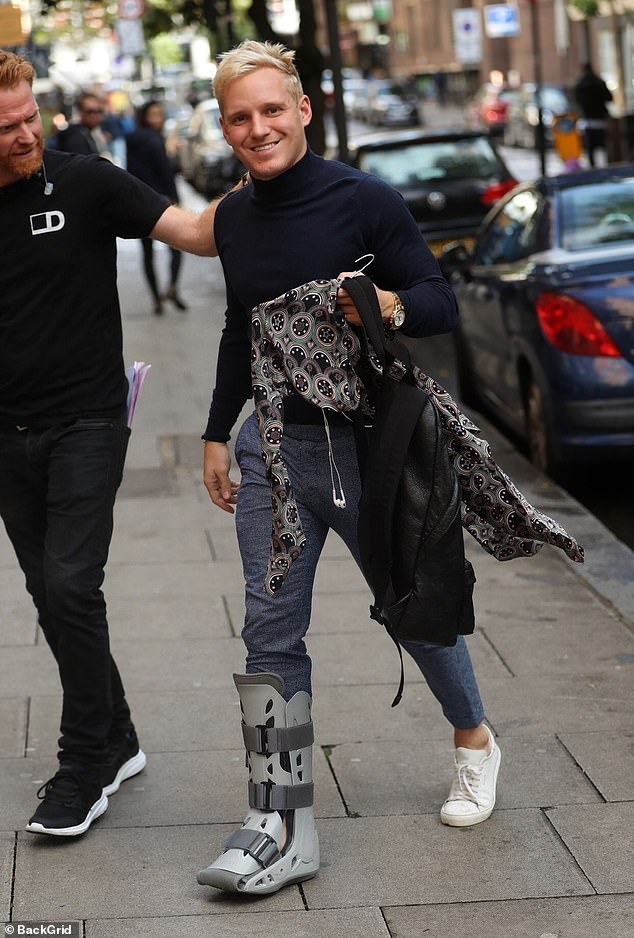 Tragic: Made In Chelsea star Jamie was forced to pull out of Strictly in September, after he injured his foot during filming for the launch show 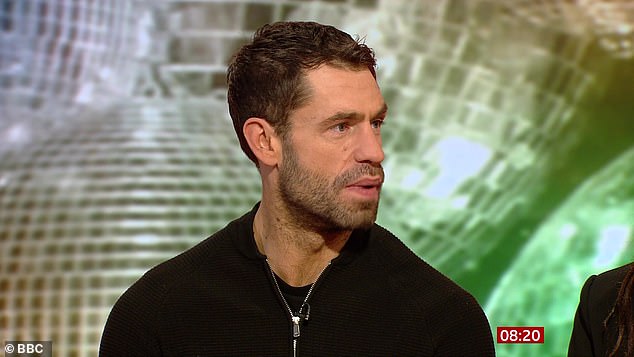 Unlikely: The Emmerdale star was a guest on BBC Breakfast to speak about his victory, as he said that show bosses only gave him an hour to decide whether he wanted to join the show

Oti – who was originally partnered with Jamie – explained: ‘It was a tear in his foot when he was sliding towards me in the first dance and he said I can’t walk, we went to the doctor and to see a specialist, and he said he had to be out for six to eight weeks to rest…

‘In that time no one knew whether I was going to have a partner or not it was just a waiting game and behold!’

Kelvin then revealed that he was given just an hour by Strictly bosses to decide whether he wanted to join the show.

He said: ‘I had an hour or so to make a decision, they couldn’t tell me too much, they didn’t tell it was Jamie who had the unfortunate incident, and naturally, one would say it’s the best show on TV where do I need to go?’ 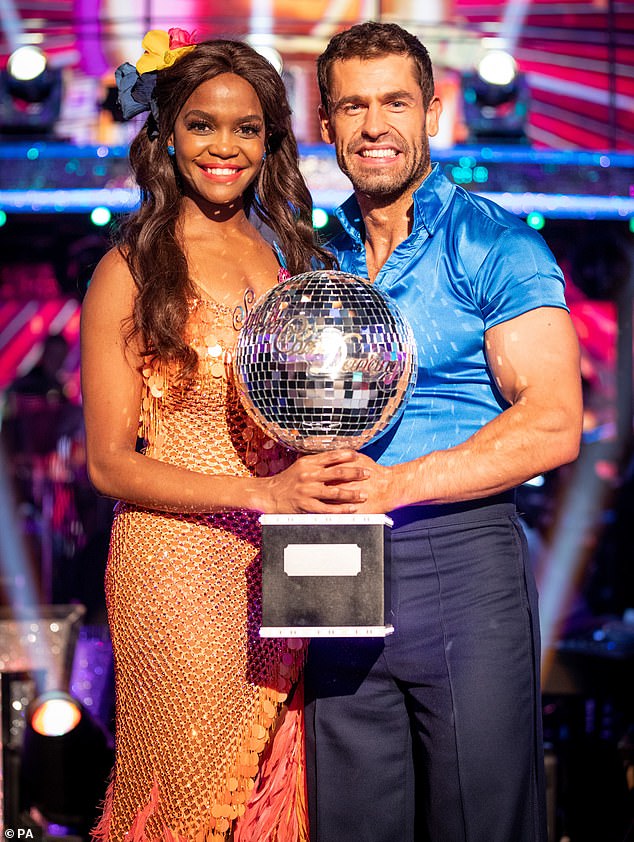 Amazing: Kelvin was crowned the winner of Strictly Come Dancing 2019 alongside his professional partner Oti Mabuse in Saturday’s final

In September Jamie was forced to pull out of Strictly following his knee injury, and broke the news to fans in a statement just days before the pre-recorded launch show was due to air.

For several days fans wondered whether another star would step in to replace him, and after the launch aired bosses confirmed that Kelvin was the last minute signing.

Given the last minute nature of Kelvin’s signing, Oti also revealed that he didn’t receive the usually pre-Strictly crash course given to all the celebrities.

She explained: ‘Usually the celebrities have a week of prep and our Creative Director gives them an intro to all the dances. [Kelvin] was told on Tuesday, we met on Thursday, and on Monday we started doing the samba.’

‘I didn’t get an foundation course, from then on all dances are difficult they’re just extremely difficult.’ Kelvin added. 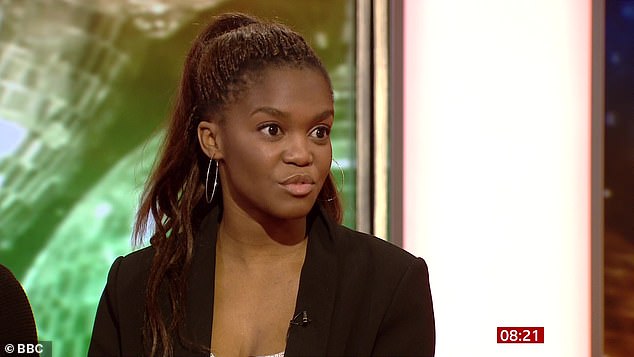 Gorgeous: Oti said that due to Kelvin’s last-minute signing he didn’t receive the pre-Strictly crash course given to all the celebrities, and instead it was straight into training for the samba

Reflecting on his final performance of the series, which saw him and Oti reprise the Samba they first performed in Week One, Kelvin admitted he added an extra move without his partner’s permission.

He said: ‘I’m cringing a bit because afterwards we’re going to messages from Oti with screenshots of like ”why are you clapping here?” For 13 weeks I’ve had screenshots with arms that are an inch out of place.’

Oti added: ‘I honestly think the way he came into the competition was really special, in the beginning it was just Kelvin and I, he wasn’t introduced to everyone so quickly, he works so hard, we really worked hard.

‘We only started with eight hours, which became ten then 13 and he’s  v technical and he wants to get every little bit right. It was just the love for dance I think was really special.’ 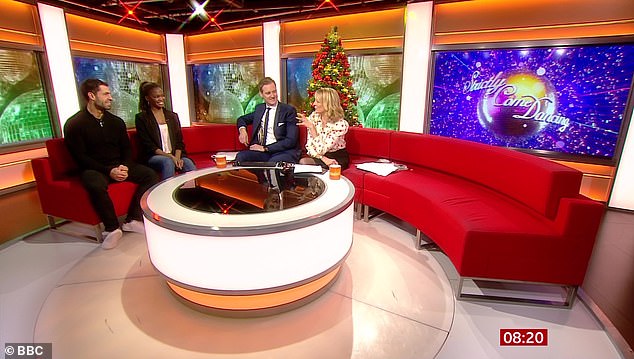 Sensational: Kelvin and Oti both said they were stunned to be crowned the series champions, but the actor joked he’d had 13 weeks of rigorous training and critique from his partner

Kelvin will reunite with his Strictly co-stars for the tour in early 2020, but due to Oti’s job on The Greatest Dancer, he will instead be performing with Janette Manrara.

The actor also admitted that just a week after his Strictly training started, he had to take a break to complete his final race in the British GT Championship.

He explained: ‘I signed up for Strictly and then it was a case of sorry guys I’ve got one more race to do, we’d almost won the championship so I just had to finish and that weirdly in itself can bring a bit of added pressure.

‘I did a week of rehearsals and then won the race, they put twinkle toes on my car and put a Glitterball in my garage, it’s one of those fluke years that just line up.’ 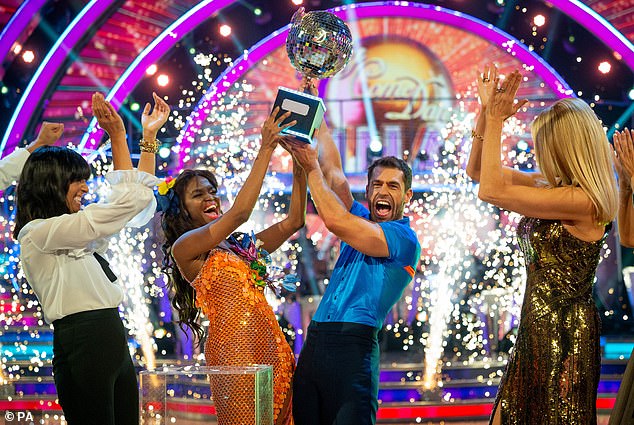 Back to work: Despite being crowned champions together (pictured), Kelvin will not be dancing with Oti on the tour due to her commitments as a judge on The Greatest Dancer

Share
Facebook
Twitter
Pinterest
VK
WhatsApp
Previous articleDennerby: Why I Hired Dede As My Assistant For India Job
Next articleSunrise host Sam Armytage has driving ban overturned after she was clocked at 75/kmh in a 40 zone
- Advertisement -

0
The duo have been at loggerheads since the show veteran, 37, enjoyed a fling with 26-year-old Amber's now-boyfriend Dan Edgar, 29, earlier this...
Read more

0
The Jesus Walks rapper, 42, reportedly claimed his pal's streaming service owed him $3 million following the release of The Life of Pablo...
Read more

0
The parents-to-be reconciled for the sake of their unborn son earlier this month.Powered by: Daily Mail
Read more

0
Vogue Williams and Spencer Matthews are having the time of their lives as they spend the festive period on the island of St...
Read more
- Advertisement -
intercontinental
news