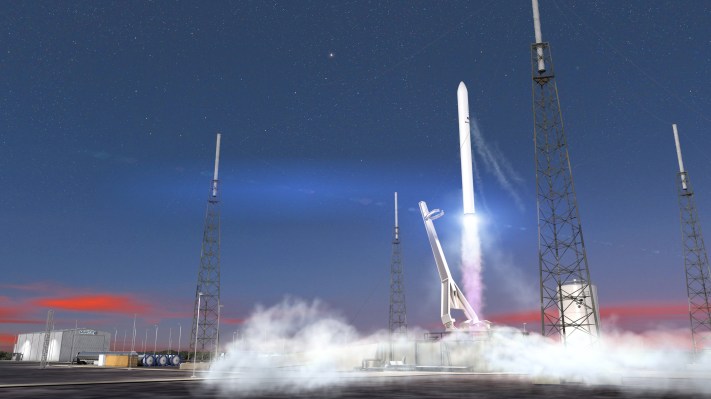 Relativity’s Terran 1 rocket will carry Momentus’ small and medium-sized satellite payloads on its rocket and Momentus will then move those satellites into geosynchronous orbit using its own in-space shuttle technology.

The deal between Momentus and Relativity covers the first Terran 1 launch scheduled for 2021, with the option for five additional Relativity launches, according to a statement from the company.

The tie-up links two of Y Combinator’s space-focused alumni, with Momentus graduating in 2018 and Relativity launching from the accelerator in 2016.

In July, Momentus closed on a $25 million round of funding to move its business from simply providing a thruster for existing small-sats to becoming a full-service provider of orbital transportation services for payloads. The company’s key innovation was the development of a water-based plasma propulsion system for low-cost transportation in space. That’s what powers the company’s Vigoride orbital shuttle.

Meanwhile, Relativity Space is barreling ahead with its own technology development.

With the goal of building a rocket that goes from raw materials to launch-ready in less than 60 days with a payload capacity of up to 1250 kilograms, the company is planning its first test launch in 2020 with a commercial payload ready for 2021.

So far the company has performed 200 engine tests to date across 14 different serial numbers and begun conducting turbo pump testing as well. Testing has also begun on the company’s initial avionics hardware, according to company co-founder Tim Ellis.

“With Momentus’ innovations in sustainable in-space ‘last mile’ solutions, we look forward to working together to expand Terran 1’s flexibility and offering beyond LEO, offering small and medium satellite launch opportunities with industry-defining lead time, flexibility, and cost,” Ellis said in a statement. “This partnership will enable us to build the space economy faster, and accelerate the future of humanity in space.”

The company has dramatically expanded its production, testing and launch facilities to include 280,000 square feet of operations on facilities at Cape Canaveral in Florida and the NASA Stennis Space Center in Mississippi.