Moderate Democrats Line Up Behind Impeachment as House Prepares to Vote 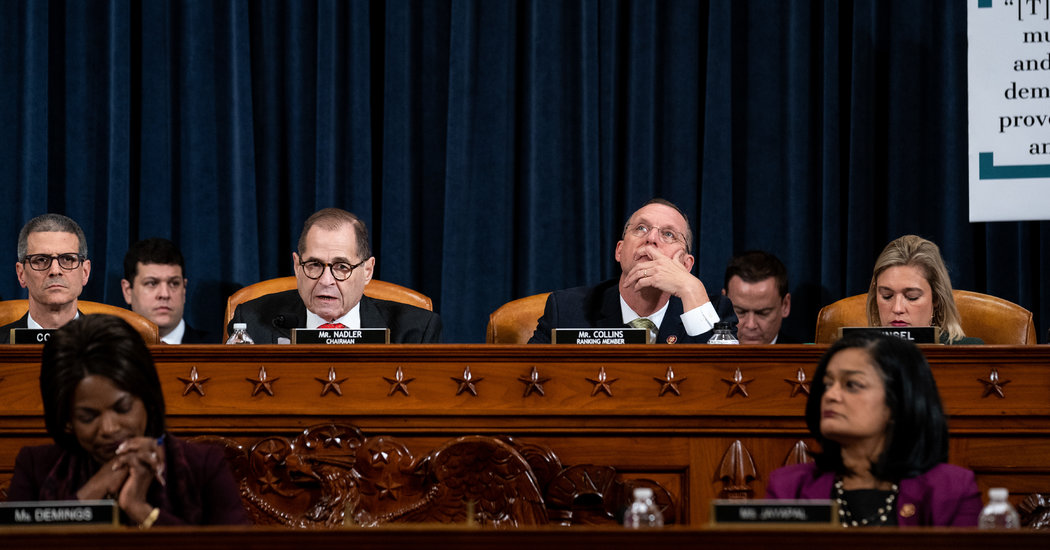 WASHINGTON — Democratic lawmakers representing conservative-leaning districts announced one by one on Monday that they would cast votes this week to impeach President Trump, signaling that a critical bloc of the most politically vulnerable Democrats is pulling together behind the party’s effort to seek his removal from office.

Two days ahead of a historic vote on two articles of impeachment, about a half-dozen first-term Democrats in districts that Mr. Trump won in 2016 — all impeachment skeptics — said they had become convinced that they had no choice but to move forward with official charges of high crimes and misdemeanors against the president.

The House is all but certain to pass two articles of impeachment, for abuse of power and obstruction of Congress, against Mr. Trump on Wednesday on a mostly party-line vote, making him the third president in history to be impeached.

In comments to constituents, interviews and opinion pieces, and statements issued by their offices on Monday, the moderate Democrats said they were embracing impeachment fully aware that their decision could cost them their congressional careers.

“What the president did was wrong,” said Representative Ben McAdams of Utah, whose district skews Republican by 13 percentage points. “His actions warrant accountability. I cannot turn a blind eye, thereby condoning this president and future presidents, Republican or Democrat, to do the same.”

“I will vote yes, knowing full well the Senate will likely acquit the president in a display of partisan theater that Republicans and Democrats perform disturbingly well,” Mr. McAdams added in a statement that criticized how members of both parties have handled the impeachment debate.

Mr. McAdams and more than two dozen other moderate Democrats were at the forefront of the political wave that swept their party into the House majority in 2018 and gave the gavel to Speaker Nancy Pelosi, who herself was an impeachment skeptic until charges emerged this fall that Mr. Trump had pressured Ukraine to help him in the 2020 election.

The allegation that the president abused his power to exact political favors from Ukraine, withholding as leverage nearly $400 million in vital military aid and a White House meeting, changed the landscape for many centrists. And on Monday, they said the results of the House Intelligence Committee’s investigation confirming the charges ultimately changed their minds.

They described their decisions as driven by the Constitution and by history, not by politics.

Representative Joe Cunningham of South Carolina, who represents a district where Republicans have a 10-point advantage, said Republicans had offered no convincing evidence to exonerate Mr. Trump, adding, “This is simply about the rule of law.”

“If I wanted to do what was easy politically, I would just vote no and move on,” Mr. Cunningham told his hometown paper, The Post & Courier in Charleston, S.C. “But it’s about doing what’s right for our country.”

In Michigan, Representative Elissa Slotkin, a C.I.A. analyst, was greeted with jeers, chants and political threats from constituents at a town-hall-style meeting after revealing in a newspaper op-ed that she, too, would vote for both articles of impeachment.

In comments to reporters after the meeting, Ms. Slotkin said the decision was a “tough call.”

“I knew it would be controversial either way,” she said. “And I feel very firmly that I’m doing what I think is right. It may be that voters decide in 2020 that they don’t want me as their representative. I hope that’s not the case. I really do.”

The question at the heart of the impeachment debate is not whether Mr. Trump leaned on Ukraine to investigate one of his political rivals when Kyiv was in dire need of American military aid. Both Republicans and Democrats agree that he did. At issue is whether that constituted an egregious abuse of power that warrants impeachment.

The statements of support from the Democratic lawmakers came as the House Judiciary Committee formally presented its case for impeaching Mr. Trump in a 658-page report published online early Monday morning, arguing ahead of the final vote in the House that he “betrayed the nation by abusing his high office.”

Across the Capitol, Senator Chuck Schumer, Democrat of New York and the minority leader, previewed a coming partisan clash over the procedures to govern an impeachment trial in the Senate, demanding for the second day in a row that Republicans call senior White House officials to testify as witnesses.

Representative Collin C. Peterson of Minnesota has signaled he intends to vote no. Representative Jeff Van Drew of New Jersey also plans to oppose the impeachment articles, but he plans to become a Republican either immediately before or just after the vote, leaving his own re-election chances murky in his swing district.

Lawmakers began returning to the Capitol on Monday as Congress braced for one of the most consequential weeks in recent memory. On Tuesday, they are scheduled to vote on a $1.4 trillion spending deal to avert a government shutdown. And on Thursday, lawmakers are expected to approve a new North American trade pact to replace NAFTA.

On Wednesday, the House will formally vote on the recommendations contained in the Judiciary Committee report, which echoes similar documents produced during the impeachment inquiries involving Presidents Richard M. Nixon and Bill Clinton.

The report provides no new allegations or evidence. But it offers a detailed supporting argument for the two articles of impeachment the committee approved, charging that Mr. Trump abused the power of the presidency to enlist Ukraine in tarnishing his political rivals and obstructed Congress by blocking witnesses from testifying and refusing to provide documents.

“President Trump has placed his personal, political interests above our national security, our free and fair elections, and our system of checks and balances,” the report stated. “He has engaged in a pattern of misconduct that will continue if left unchecked. Accordingly, President Trump should be impeached and removed from office.”

On Monday, the Democrats who announced they would support the charges described their votes as statements of principle against Mr. Trump’s conduct.

Representative Jason Crow of Colorado, who announced his decision at a town-hall-style meeting in his district, told his constituents: “No man or woman is above the law in our country, including the president.”

Representative Abigail Spanberger of Virginia said she would vote to impeach the president because “the world, and our children, are watching.” And Representative Andy Kim of New Jersey said in a statement that he was voting to impeach Mr. Trump to “stand up to those that abuse the power entrusted to them by the people.”

The Judiciary Committee’s report argued that the House should charge Mr. Trump with abuse of power for holding up the security aid and the promise of a White House meeting until Ukraine agreed to announce investigations into former Vice President Joseph R. Biden Jr. and whether Ukraine conspired with Democrats to interfere in the 2016 election.

“When the president demands that a foreign government announce investigations targeting his domestic political rival, he corrupts our elections,” the report said. “To the founders, this kind of corruption was especially pernicious, and plainly merited impeachment. American elections should be for Americans only.”

The report included a scathing 20-page dissent from Representative Doug Collins of Georgia, the top Republican on the Judiciary Committee, who accused Democrats of conducting an unfair process in a partisan attempt to drive Mr. Trump from office because they dislike him and his policies.

“The case is not only weak but dangerously lowers the bar for future impeachments,” he wrote. “The record put forth by the majority is based on inferences built upon presumptions and hearsay. In short, the majority has failed to make a credible, factually based allegation against this president that merits impeachment.”

Looking toward a Senate trial, Mr. Schumer on Monday renewed his demand that senators who serve as jurors should hear from Mick Mulvaney, the acting White House chief of staff; John R. Bolton, the former national security adviser; Robert Blair, a senior adviser to Mr. Mulvaney; and Michael Duffey, a top budget official.

All four were blocked from testifying by the White House, which asserted a blanket privilege from cooperating with the impeachment inquiry.

“By virtue of the senior administration positions they occupy, each of them will have information to share about the charges made by the House — information that no one has heard at this point,” Mr. Schumer said, adding that the Senate should also demand documents that the administration refused to provide to House investigators. “How, on such a weighty matter, could we avoid hearing this?”

The remarks by Mr. Schumer were the opening salvo in a coming negotiation with Senator Mitch McConnell of Kentucky, the Republican leader. Mr. McConnell has signaled that he prefers a quick impeachment trial without witnesses, and has said that he will coordinate closely with Mr. Trump and his White House lawyers on the trial process.

Republicans close to Mr. McConnell said that the senator planned to meet with Mr. Schumer, probably before the week is over, to begin discussions about how to conduct a trial. While Mr. McConnell, as majority leader, can dictate the terms of a trial, his slim 53-seat majority means that the handful of more moderate Republican members in his ranks will have influence over how it unfolds.

Senator Susan Collins of Maine, one of those moderate Republicans, declined on Monday to say whether she wanted witnesses to testify.

“I’m not going to make a judgment on the witness issue,” Ms. Collins said. “What I would like is for the leaders to sit down, as Senator McConnell has suggested, and work out a common set of procedures.”

But Senator Joni Ernst, Republican of Iowa, who is up for re-election next year, said she saw no need for the Senate to call additional witnesses for an impeachment case she called “a political exercise from the start.”

‪“I think we’re good there,” Ms. Ernst said. “I mean, if the House wanted to do more, they could have done more. We don’t need to clean up their sloppy job.”‬

Democrats Near Deal With White House on Stimulus Package

0
WASHINGTON — Top Democrats and Trump administration officials said they were optimistic about finalizing an agreement on Tuesday on a roughly $2 trillion...
Read more

0
WASHINGTON — The Treasury secretary and the top Senate Democrat said late Monday that they were on the brink of a deal...
Read more

On Politics: The Economy Won’t Distance

0
Good morning and welcome to On Politics, a daily political analysis of the 2020 elections based on reporting by New York Times...
Read more