The Gaza Strip which has one the densest populations on earth has been hit with coronavirus.

The territory, an enclave bordering Israel which has 5,154 people per km, reported two cases of Covid-19 today.

It has so far avoided infection due to its sealed borders with Israel and Egypt.

The cases raise fears that the virus will spread quickly through the over-populated territory, which has been largely closed to the outside world since 2007. 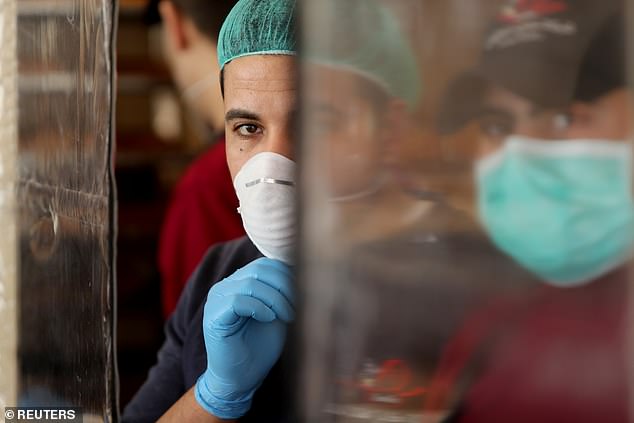 The Gaza Strip, an enclave bordering Israel which has 5,154 people per km, reported two cases of Covid-19 today. Pictured: Palestinians, wearing masks as a preventive measure against the coronavirus disease, work in a bakery in Gaza City today 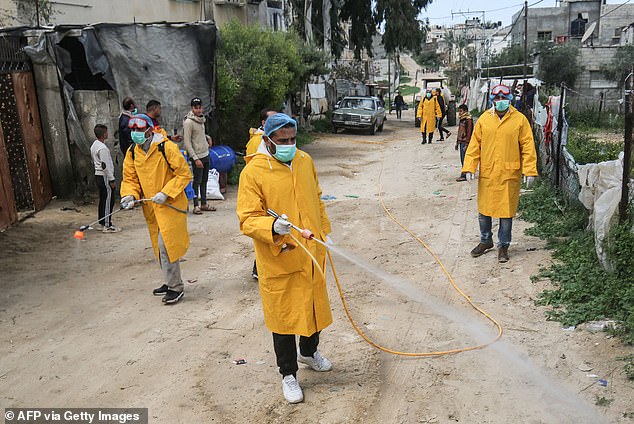 Palestinian volunteers wearing protective clothes and masks disinfect a street as a preventive measure against the spread of novel coronavirus, in Rafah in the southern Gaza Strip today

Now there are fears that the spread of the virus in Gaza could tip it into a serious humanitarian crisis.

The two patients, both Gazans, had travelled to Pakistan before returning to the coastal enclave through Egypt, the Health Ministry said.

Both are being treated in a quarantine facility in a field hospital in Rafah, close to Gaza’s southern border.

Health spokesman Dr Ashraf Al-Qedra said the sufferers are aged between 30 and 40 and both are in stable condition.

They were tested for the virus on arrival after displaying dry coughs and fevers.

‘Thank God, the circle of contact wasn’t big,’ Salama Marouf, a government spokesman, said. All those who were in contact with the two men had been quarantined, he added.

More than a thousand people have entered Gaza in the last two weeks but only 92 have been screened, highlighting the territory’s limited testing capacity.

A WHO spokesman in Gaza told MailOnline that 90 coronavirus test kits had arrived from Israel today, as well as gowns and masks.

The streets of Gaza were empty today as its inhabitants stayed at home in fear of transmission. But there was activity at the supermarkets, as residents battled to stockpile goods. 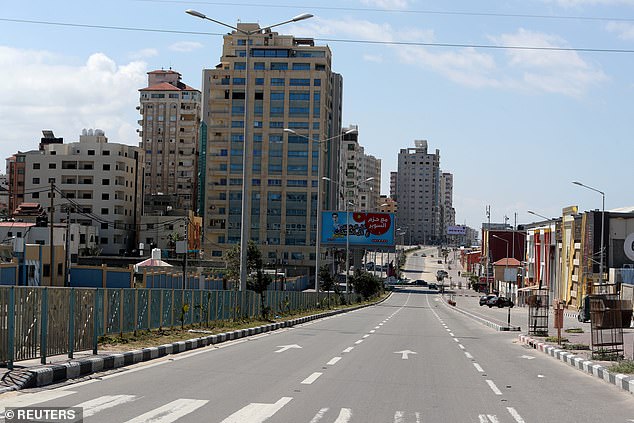 A street is seen almost empty amid concerns over the spread of the coronavirus disease, in Gaza City

Mohammed Fayez, the owner of a small store in Yibna refugee camp, near Rafah, said he was worried about replacing the goods he sold today.

‘I am not sure there would be enough goods for me to buy now,’ he said. ‘What if the Israelis closed all the crossings?

‘How would we get what we need?’

Most people were buying groceries on credit, he said, in a territory where unemployment approaches 50 per cent.

‘As a shopkeeper, I’m worried that if don’t get enough cash, I won’t be able to fill the shelves again,’ Mr Fayez added.

Yousef Naser Allah, a manager in Metro Mall, one of the largest stores in the strip, said the panic buying was unprecedented despite a regular cycle of war and violence.

‘The shelves have been emptied in a few hours,’ he said. ‘People are afraid of what this new crisis may cause.

‘I can say that we are still able to control the situation, we still have enough goods so far.’ 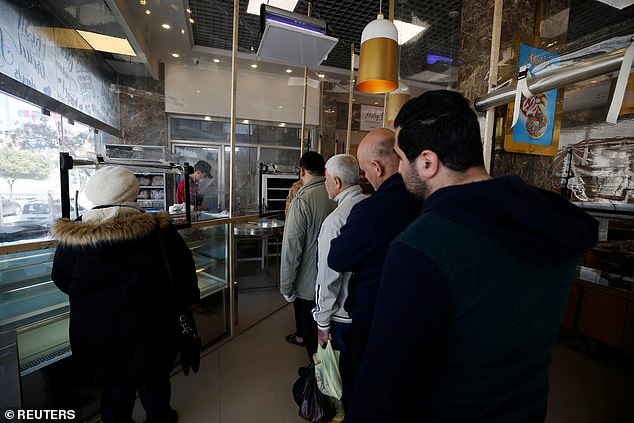 Palestinians stand in line as they wait to buy bread at a bakery amid concerns over the spread of the coronavirus disease, in Gaza City

The territory, measuring 375 square kilometres (145 square miles) is home to around two million Palestinians and poverty and unemployment rates are high.

Movement in and out of Gaza has been restricted by Israel and Egypt since 2007, amid security concerns over the ruling Islamist group Hamas.

In the past two years, some travel restrictions have been relaxed. But measures have been tightened again since the outbreak.

On Sunday, Israeli authorities announced that all crossings into the country from Palestinian territories were forbidden, as border controls were strengthened in a bid to halt the virus.

Exceptions were to be granted only to nurses, health workers and exceptional medical cases, officials added.

Last week, Hamas said it would allow only patients requiring urgent medical treatment outside Gaza to cross into Egypt or Israel.

Hamas, the militant group in control of the territory, has ordered the closure of restaurants, cafés, schools, public markets and event halls. 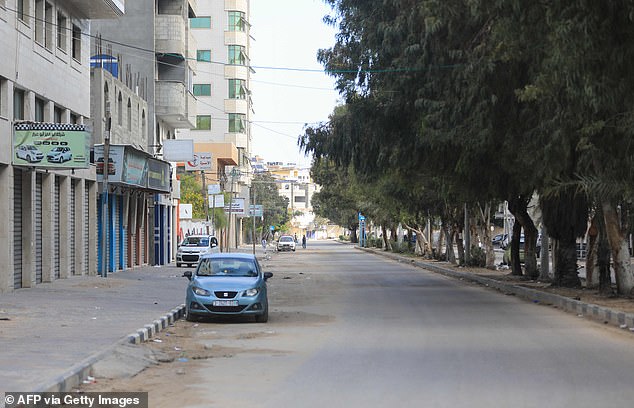 Cars parked on the side of an empty street in a neighbourhood in Gaza City. People have stayed indoors over concerns of the spread of the virus

It also banned Friday prayers at mosques until further notice.

Dr. Youssef Abulreesh, Gaza’s Deputy Minister of Health, urged Gaza’s residents to practice social distancing by staying home in a bid to halt the spread of the virus.

More than 1,270 Gazans are being kept in isolation at schools, hospitals and hotels after entering the coastal enclave, the ministry revealed.

Muhammad Shtayyeh, Prime Minister of the Palestinian Authority on the West Bank, introduced a series of new measures to combat the spread of the virus today.

These included reduced opening hours for banks and the closure of all government departments except for health, civil affairs and finance.

He stressed that the Palestinian Ministry of Health will split their resources with the Hamas-ruled Gaza strip.

In Israel, 945 have tested positive of whom 863 are mild, 24 moderate and 20 critical. Thirty-seven have recovered and one victim – an 88-year-old Holocaust survivor – has died.

0
The father of a murdered Norwegian student has called for the suspected murderer, a billionaire tycoon's fugitive son, to return to the UK...
Read more