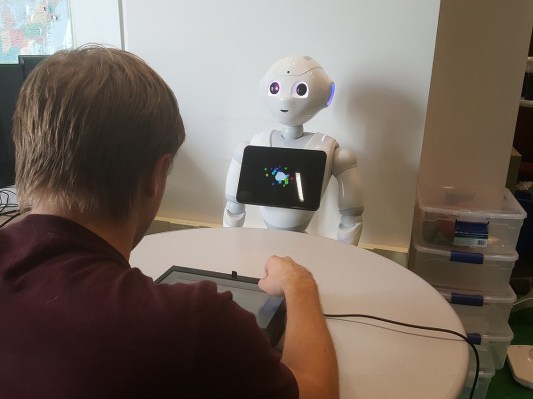 A commons tactic in both amateur and professional sports – and even in competitions as mundane as a casual board game night – is trash talk. But the negative effect of trash talk may have less to do with the skill of the repartee involved, and more with just the fact that it’s happening at all. A new study conducted by researchers at Carnegie Mellon University suggests that even robots spitting out pretty lame pre-programmed insults can have a negative impact on human players.

CMU’s study involved programming one of SoftBank’s Pepper humanoid robots to deliver scorchers like “I have to say you are a terrible player” to a group of 40 participants, who were playing the robot in a game called “Guards and Treasures,” which is a version of a strategy game often used for studying rationality. During the course of the experiment, participants played 35 times against the robot – some getting bolstering, positive comments form the robot, while others were laden with negative criticism.

Both groups of participants improved at the game over time – but the ones getting derided by the bots didn’t score as highly as the group that was praised.

It’s pretty well-established that people excel when they receive encouragement from other – but that’s generally meant other humans. This study provides early evidence that people could get similar benefits from robotic companions – even ones that don’t look particularly human-like. The researchers still want to do more investigation into whether Pepper’s humanoid appearance affected the outcome, vs. say a featureless box or an industrial robot acting as the automaton opponent and doling out the same kind of feedback.

The results of this and related research could be hugely applicable to areas like at-home care, something companies including Toyota are pursuing to address the needs of an aging population. It could also come into play in automated training applications, both at work and in other settings like professional sports.

0
Ford said Tuesday won’t restart its factories in the U.S., Canada and Mexico on Monday, March 30 as the automaker had originally...
Read more

0
Ranker, an online publisher that turns crowdsourced lists and fan-rankings into a data business, is now turning its attention to the world of streaming...
Read more
- Advertisement -
intercontinental
news