Arizona secretary of state State Katie Hobbs, a Democrat, provided the certification, which also got a sign-off from the state’s Republican governor, Governor Doug Ducey.

The news, yet another blow for the president’s legal strategy seeking to overturn the vote in states that voted for Biden, came as Trump railed against ‘corruption’ in the state.

The certification closing off yet another pathway for Trump came as his lawyers Giuliani and Jenna Ellis appeared at another hearing-style event to make their case for widespread election fraud.

As at one last week in Gettysburg, Pennsylvania, the event was an unofficial hearing in a hotel lobby featuring only Republican lawmakers without witnesses being put under oath.

Giuliani repeated many of his earlier allegations, throwing in a few new details, such as a reference to Hunter Biden’s laptop, the focus of his pre-election corruption charges that has virtually vanished following the November 3 election.

‘I call this the McCarthy era on steroids,’ Giuliani said, noting that lawyers from a prominent firm quit Trump’s legal team after facing pressure.

‘It began with the revelation of the hard drive that proves substantial major crimes on behalf of the Biden’s family,’ Giuliani said, referencing Hunter’s laptop, which he provided to media outlets weeks before Election Day.

‘This election was the subject of a conspiracy that goes back before the election,’ he said.

Once again, witnesses organized by Giuliani put forward unsupported claims about Dominion Voting Systems machines, including a claim tying allegations of election fraud to the Hugo Chavez regime in Venezuela. Chavez is diseased.

Giuliani claimed it was ‘hatched by the crooked leaders of the Democratic party’ and said: ‘We have an illegitimate election.’

‘In probably at least 100,000 situations Maricopa,’ he said of the populous Arizona County.

‘The key fraud is the mail-in ballot. That was the backup in case they fell too far behind,’ he said. 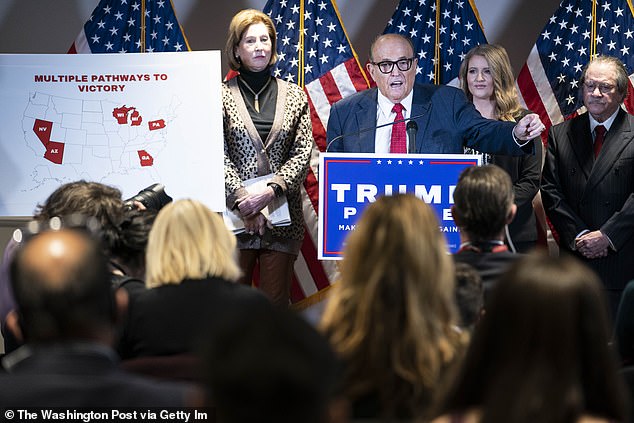 Giuliani revisited allegations at a recent presser at the RNC 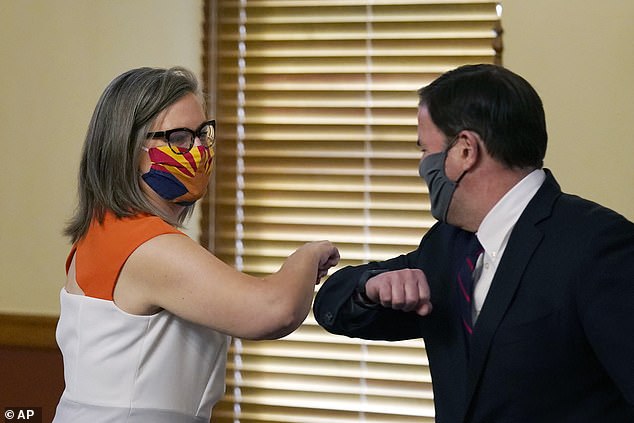 Arizona Secretary of State Katie Hobbs, left, and Arizona Gov. Doug Ducey bump elbows as they meet to certify the election results for federal, statewide, and legislative offices and statewide ballot measures at the official canvass at the Arizona Capitol Monday, Nov. 30, 2020, in Phoenix

Speaking in state on the southern border, Giuliani introduced a new element of the conspiracy: illegal immigrant voters.

‘Let’s say there are 5 million illegal aliens in Arizona. It is beyond credulity that a few hundred thousand didn’t vote,’ he said.

At the all-Republican hearing-style event, Giuliani questioned retired Army Col Phil Waldron, who also was featured at the Pennsylvania event.

He claimed a ‘1.9 million vote fraud potential’ based on a Maricopa County official saying some ballot signatures were not verified.

It was one of several times when officials hedged their claims, such as when Giuliani said there were ‘probably at least 100,000 situations Maricopa’ County.

Meanwhile, Biden’s victory in battleground Wisconsin was certified Monday following a partial recount that only added to his 20,600-vote margin over Trump, who has promised to file a lawsuit seeking to undo the results.

Gov Tony Evers, a Democrat, signed a certificate that completed the process after the canvass report showing Biden as the winner following the recount was approved by the chairwoman of the bipartisan Wisconsin Elections Commission.

Evers’ signature was required by law and is typically a procedural step that receives little attention.

‘Today I carried out my duty to certify the November 3rd election,’ Evers said in a statement.

‘I want to thank our clerks, election administrators, and poll workers across our state for working tirelessly to ensure we had a safe, fair, and efficient election. Thank you for all your good work.’

The action Monday now starts a five-day deadline for Trump to file a lawsuit, which he promised would come no later than Tuesday.

Biden’s campaign has said the recount showed that Biden won Wisconsin decisively and there was no fraud.

Even if Trump were successful in Wisconsin, the state’s 10 Electoral College votes would not be enough to undo Biden’s overall victory as states around the country certify results.

‘There’s no basis at all for any assertion that there was widespread fraud that would have affected the results,’ Wisconsin’s Democratic Attorney General Josh Kaul said in a statement Monday.

He noted that Trump’s recount targeted only the state’s two most populous counties where the majority of black people live.

‘I have every confidence that this disgraceful Jim Crow strategy for mass disenfranchisement of voters will fail,’ Kaul said. ‘An election isn’t a game of gotcha.’

State law gives the power to confirm the election results to the chair of the bipartisan Wisconsin Elections Commission.

The position rotates between Republicans and Democrats and is currently held by Ann Jacobs, a Democrat. She signed the canvass statement certifying Biden as the winner over objections from Republicans who wanted to wait until after legal challenges were exhausted.

Under state law, the elections staff next sent a certificate to Evers to sign and send to the US administrator of general services – a procedural step since the law says the governor ‘shall sign’ it. Evers did so about an hour after the canvassed results were confirmed.

Trump’s legal challenges have failed in other battleground states, including Arizona, Georgia, Michigan, Nevada and Pennsylvania.

Two lawsuits from others seeking to disqualify ballots in Wisconsin were filed last week with the Wisconsin Supreme Court, which has not taken action.

Trump paid $3million for recounts in Dane and Milwaukee counties, the two largest Democratic counties in Wisconsin, but the recount ended up increasing Biden’s lead by 74 votes. Biden won statewide by nearly 20,700 votes.