The wife of screen legend Sir Sean Connery, who has died at the age of 90, last night paid an emotional tribute to her ‘gorgeous model of a man’.

Revealing how his final months were blighted by dementia, Micheline, who was married to the Oscar-winning star for 45 years, said: ‘It was no life for him. He was not able to express himself latterly. At least he died in his sleep and it was just so peaceful. I was with him all the time and he just slipped away. It was what he wanted.

‘He had dementia and it took its toll on him. He got his final wish to slip away without any fuss.’

The 91-year-old Moroccan-French painter, who met the Scot in 1970 at a golf tournament and became his second wife, added: ‘He was gorgeous and we had a wonderful life together. He was a model of a man. It is going to be very hard without him, I know that. But it could not last for ever and he went peacefully.’

Sir Sean’s death brings one of most extraordinary lives in recent British history to an end.

Born Thomas Sean Connery into a working-class family in Edinburgh’s Fountainbridge district, he left school at the age of 14 and joined the Royal Navy.

He later worked in a variety of jobs, including as a milkman, labourer and lorry driver, as well as taking up bodybuilding.

It was a visit to London in 1953 to enter the Mr Universe contest that kickstarted his acting career. The future James Bond star took the opportunity to audition for a West End production of South Pacific and landed a part in the chorus. Further stage roles followed and he also broke into television and film, eventually winning a prominent role in the 1959 Disney film Darby O’Gill And The Little People.

But it was being cast as 007 that catapulted him to international stardom and acclaim. 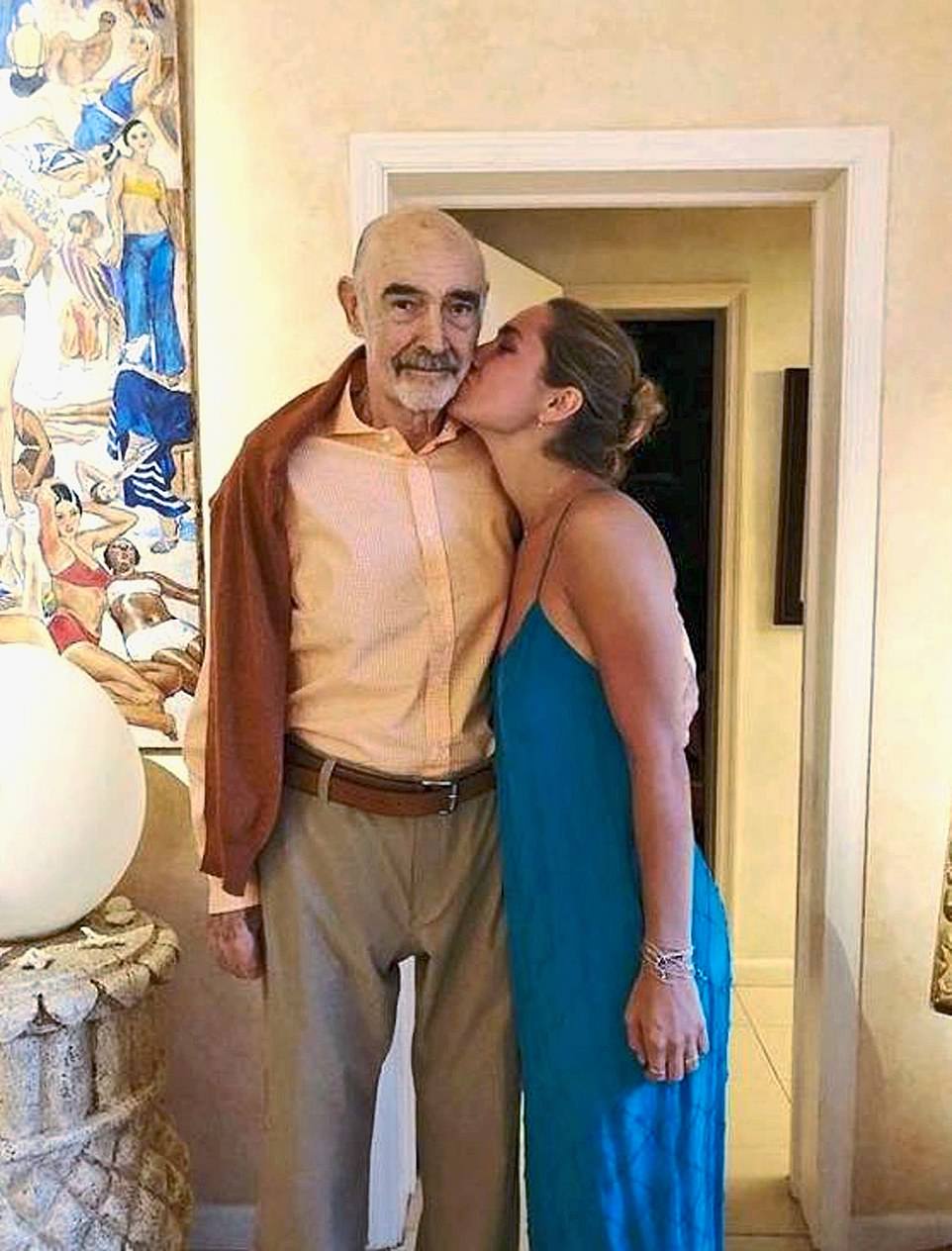 The much-loved Bond actor, who died aged 90 this weekend, pictured with his granddaughter Saskia in 2018 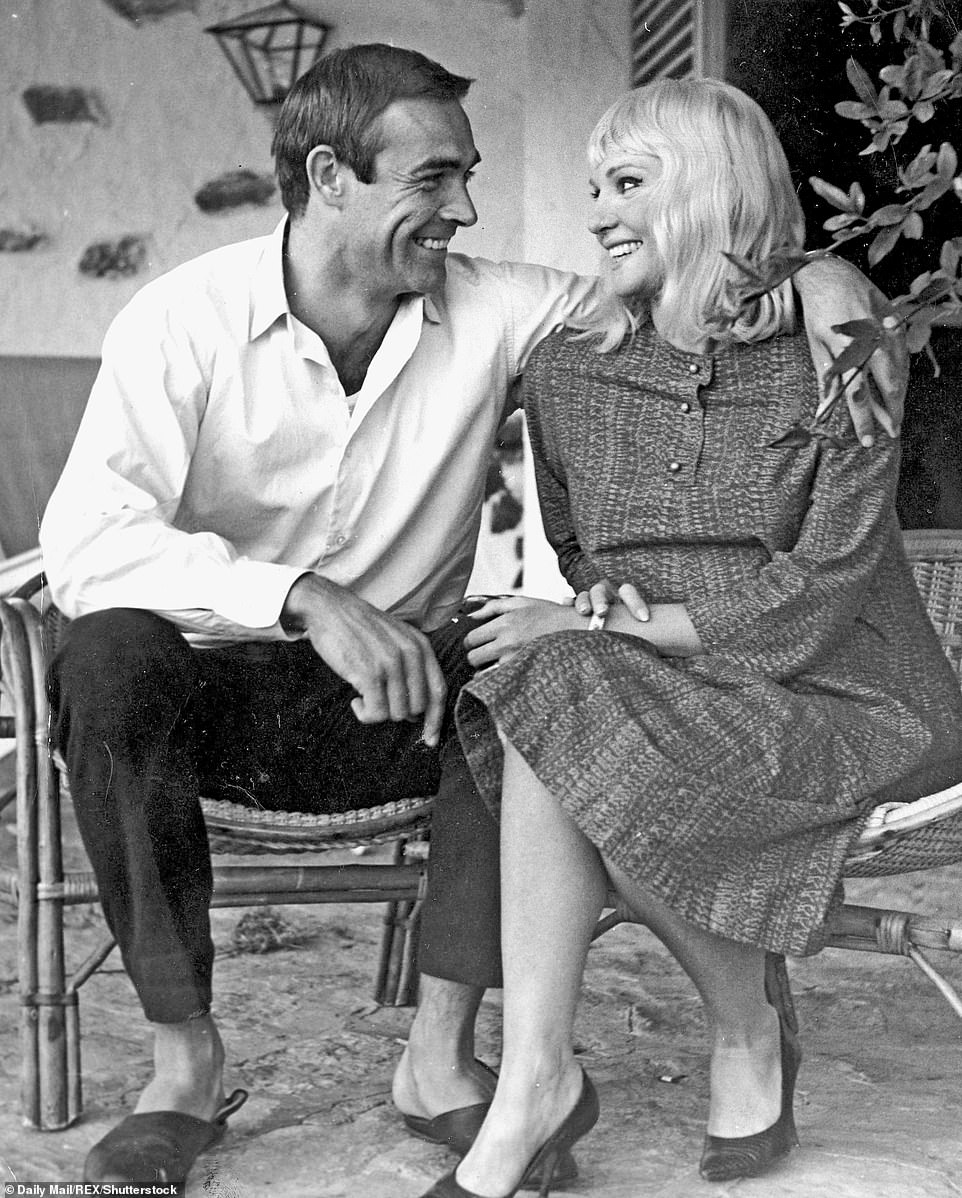 His first wife, Australian actress Diane Cilento, claimed in her autobiography that he resented her success and ‘wasn’t able to cope’ with his own fame 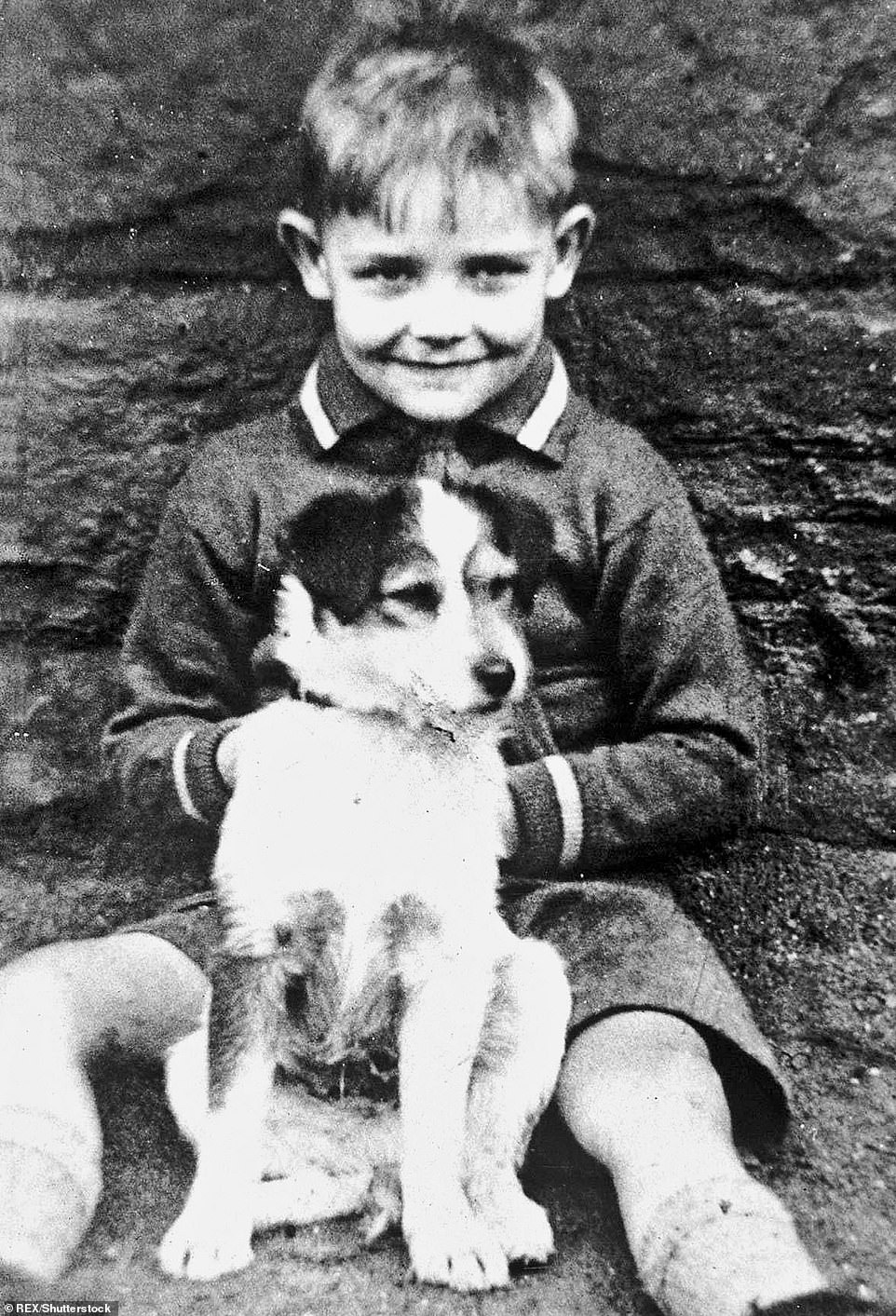 A five-year-old Sean with his pet dog in 1935. He was born in Edinburgh to a cleaning woman and factory worker 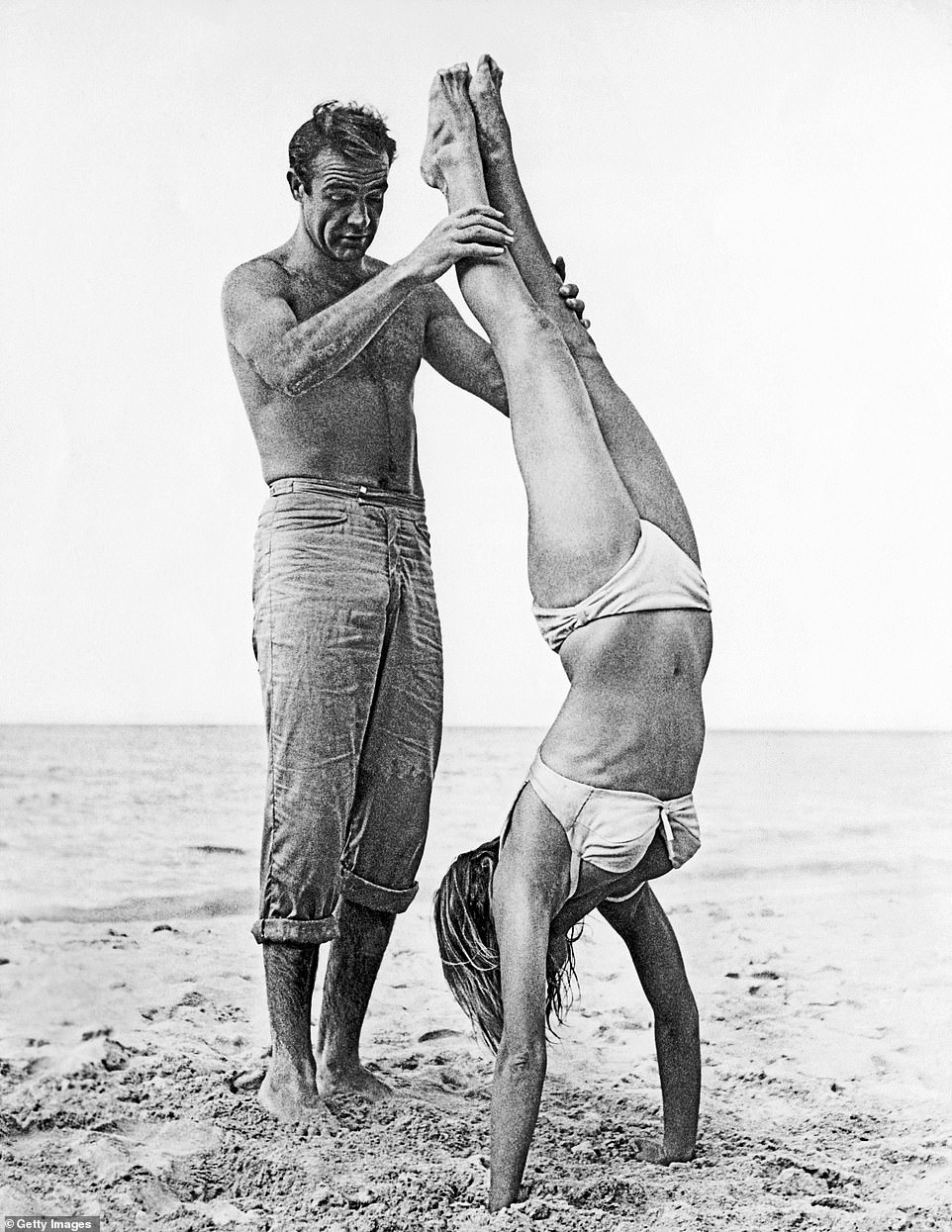 Sean Connery holds Swiss actor Ursula Andress while she does a handstand on a beach in a white bikini on the set of the film, ‘Dr. No’

The day I bonded as caddy No6

It started at an elegant dinner in Monte Carlo, as all good stories should.

While interviewing a host of stars for a sports awards event, news filtered through the room: Sir Sean Connery had arrived in Monaco and was due to play golf the next day. A plan formed in my head: I would get up early and try to get an interview with him.

So it was, in the early hours of the following morning, I headed for the finest golf course in Monaco. I spotted the Hollywood star at the first tee, wrapped up against the cold. He had three bodyguards and a sinister-looking black armoured car next to him.

‘Excuse me. I just wondered if I could have a few moments of your time?’ I shouted over.

‘I could caddy for you?’

‘I have about five caddies,’ he retorted.

‘Do you need six?’ His security moved towards me, but Connery put a hand out to stop them, smiled, and said ‘yes’. And off we went.

He was absolutely charming: incredibly good company and full of anecdotes. ‘Golf’s become a huge part of my life,’ he said. ‘You know what I do, when I’m offered a part in a film? I play a round of golf in the character that I’ve been asked to play. If I can play 18 holes in the character, I take the part.’

He fizzed with excitement as shots went his way. ‘If I get this bugger in the hole, I’m going to dance for joy,’ he said. It went in and he did his dance. At the final hole, I thanked him for his time. Later that evening, two friends took me to a small, family-owned restaurant favoured by locals – and, as it turned out, by Connery.

After a few drinks, I thought it would be fun to send over a bottle of the wine he was drinking. He sent a note back with two bottles of wine. The note said: ‘No need to send four bottles back, or we’ll be at this all night. Remember – I could buy this restaurant.’

When we went to leave, he’d settled our bill, including the wine I’d sent over to him.

His modest background perhaps made him an unlikely choice to play the suave Old Etonian secret agent. But from the moment he strode on to the screen in Dr No in 1962, the role was inextricably bound to Connery’s own blend of magnetic charm and sex appeal.

His confident, muscular Bond was for most people not only the original, but the best, and he would star in six more 007 movies.

Yet he would eventually come to loathe the role and, after becoming disillusioned with the film business, lived as a virtual recluse in the Caribbean in his later years.

Worth an estimated £266 million at his death, his private life was often as eventful as his on-screen one and he was seldom far from controversy. His first wife, Australian actress Diane Cilento, claimed in her autobiography that he resented her success and ‘wasn’t able to cope’ with his own fame. She accused him of physically and mentally abusing her, describing an incident in which he allegedly knocked her to the floor twice in a Spanish hotel room in 1964.

Connery fiercely denied the claims, branding his ex-wife an ‘insane woman’ who had never got over their divorce. But he later sparked more controversy by telling Playboy magazine: ‘I don’t think there is anything particularly wrong about hitting a woman – although I don’t recommend doing it in the same way you’d hit a man.

‘An open-handed slap is justified, if all other alternatives fail and there has been plenty of warning. If a woman is a bitch, or hysterical, or bloody-minded continually, then I’d do it.’

Connery soon backtracked and insisted he was not advocating violence against women, but the damage was done.

His marriage to Micheline survived his roving eye, including a seven-month affair with British pop star Lynsey De Paul.

Meanwhile, his passionate and oft-stated promotion of Scottish independence, despite living thousands of miles away as a tax exile, led some to level a charge of hypocrisy – even more so after he accepted a knighthood at Edinburgh’s Holyrood Palace in 2000.

In the 1980s, a slipping career was revived with starring roles in The Name Of The Rose and The Untouchables, which won him the best supporting actor Oscar for his part as a tough Irish cop.

Collecting his gong from Cher and Nicolas Cage, he addressed the crowd as ‘ladies and gentlemen, friends, a few enemies’.

Noting it was the 60th anniversary of the ceremony, he added: ‘I just realised myself the other day, my first and one and only attendance was 30 years ago. Patience truly is a virtue.’

He continued: ‘In winning this award, it creates a certain dilemma because I had decided that if I had the good fortune to win, I would give it to my wife, who deserves it.

‘But, this evening, I discovered backstage that they’re worth $15,000 and now I am not so sure. Micheline, I am only kidding. It’s yours.’

He also won praise for his part two years later as the father of Harrison Ford’s Indiana Jones in Indiana Jones And The Last Crusade, the third film in the blockbuster franchise.

In 1989 the US magazine People voted him Sexiest Man Alive, to which the then 59-year-old replied: ‘Well, there aren’t many sexy dead men, are there?’

Meanwhile, Connery gained a reputation as a ruthless contract negotiator. He hated the idea of being manipulated by the film industry and was regularly embroiled in lawsuits.

One Hollywood insider spoke of how a glittering party full of A-listers in the 1990s fell silent at his entrance. ‘When he walked in, the air was sucked out of the room,’ they said.

‘There was a Who’s Who of Hollywood stars there, including Demi Moore, Nicolas Cage, Sharon Stone and some of the most powerful studio heads in town, but Connery exuded an almost mythical power. He was sexy, of course, but it was clear he had that magical X factor.

‘The room literally fell silent when he walked in. Then everyone started swarming around him. Micheline never left his side. She guarded him like a lioness. Micheline was the first woman Sean met who was the total package – she was sexy, charming, fun.’ 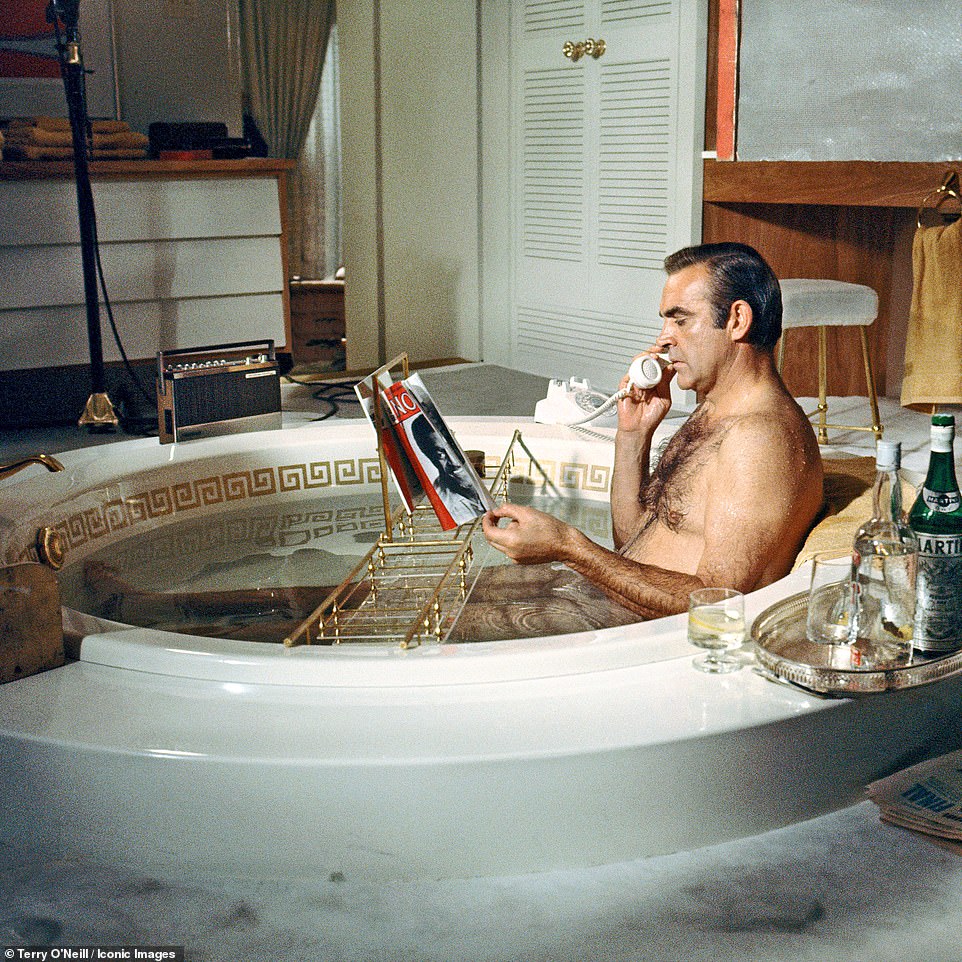 Scottish actor Sean Connery as James Bond taking a bath during the filming of ‘Diamonds Are Forever’, 1971 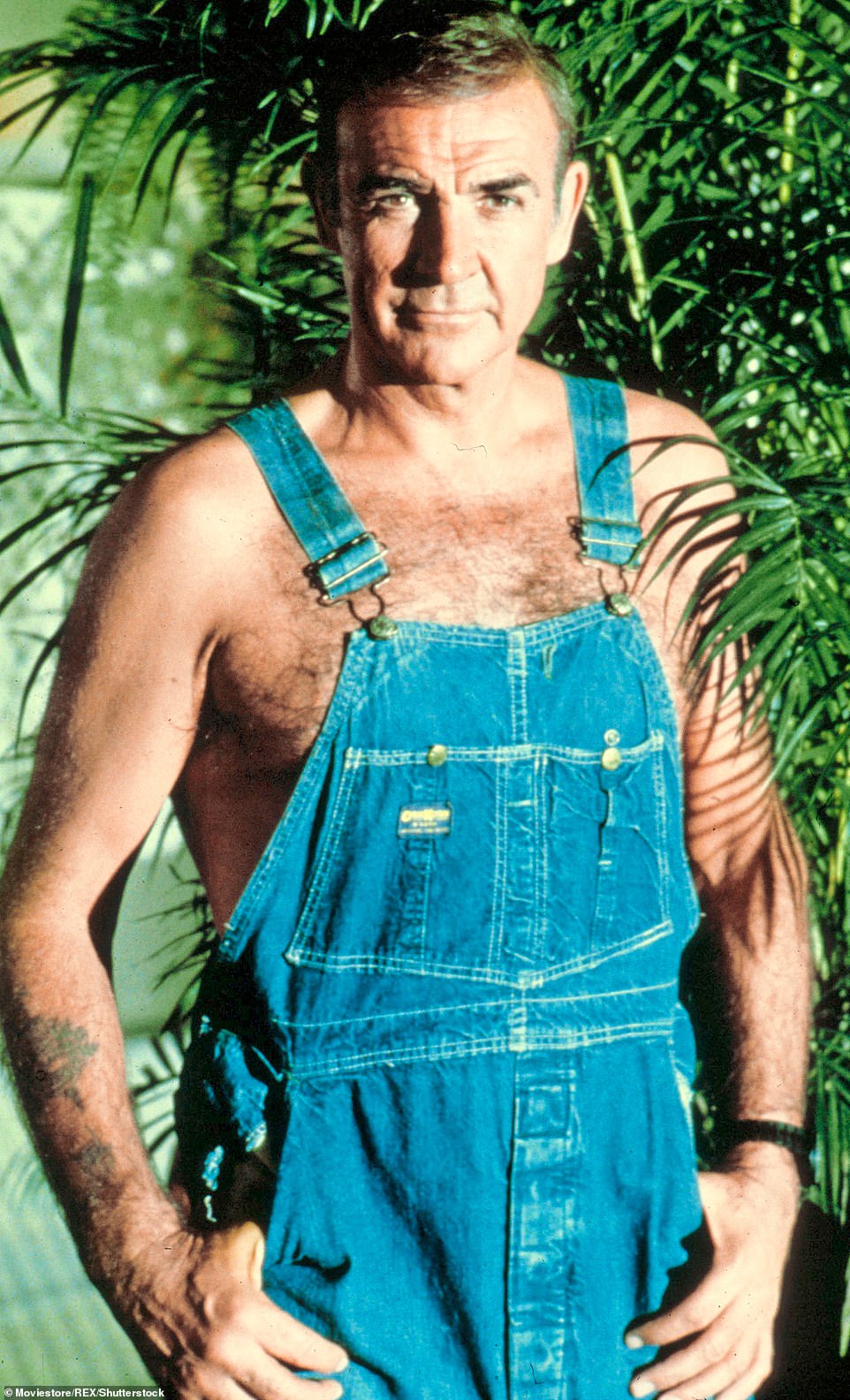 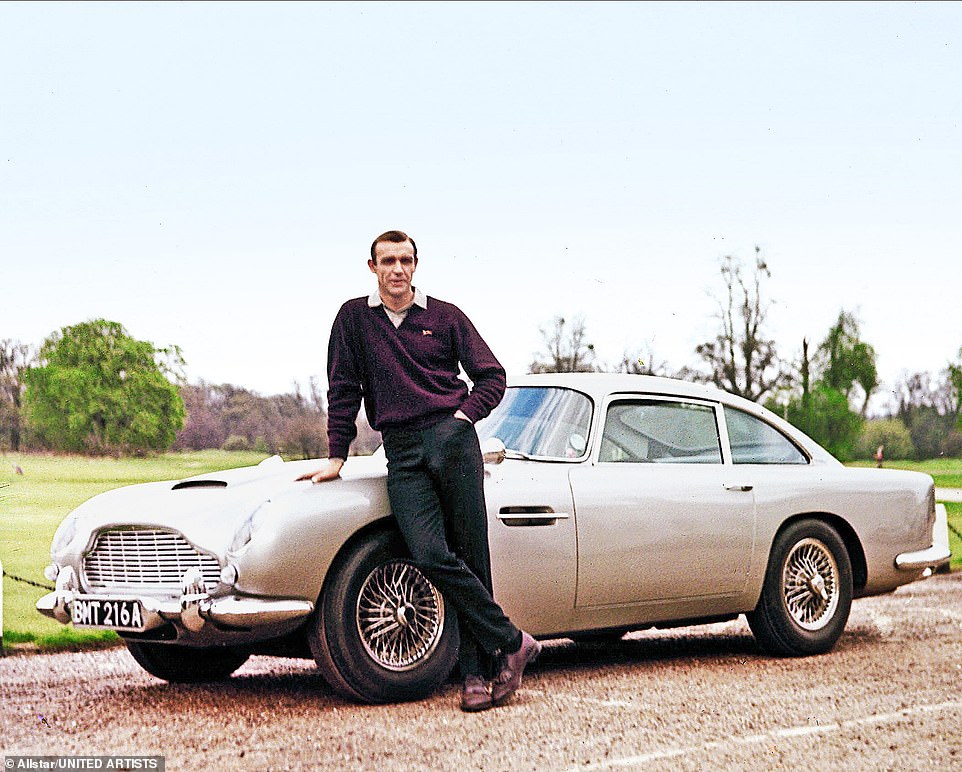 Sean Connery as Bond in 1964 with his Aston Martin DB5, now inextricably linked with the 007 films 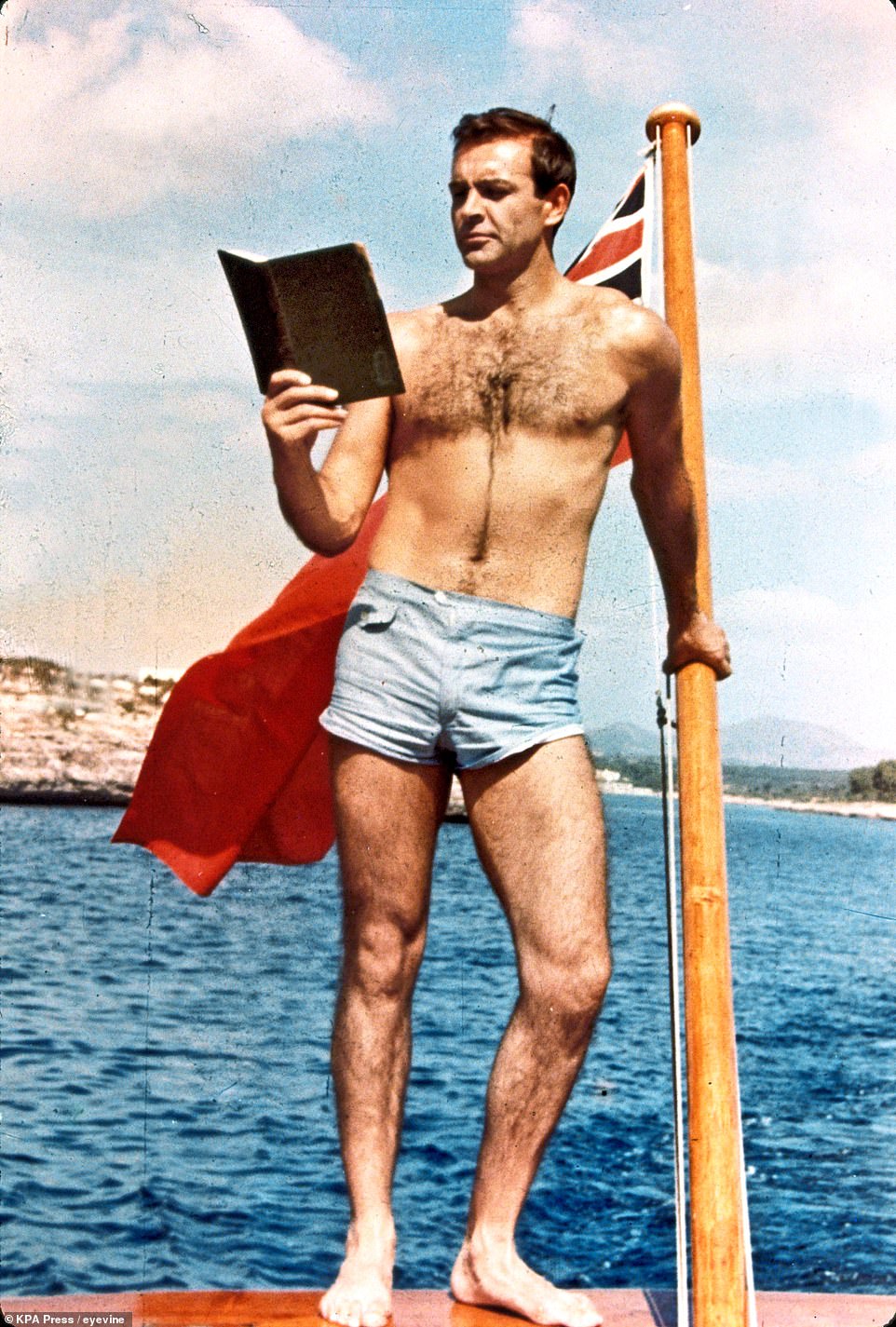 A lithe Sean Connery in 1965’s Thunderball, which was filmed in Nassau in the Bahamas where he died earlier this weekend 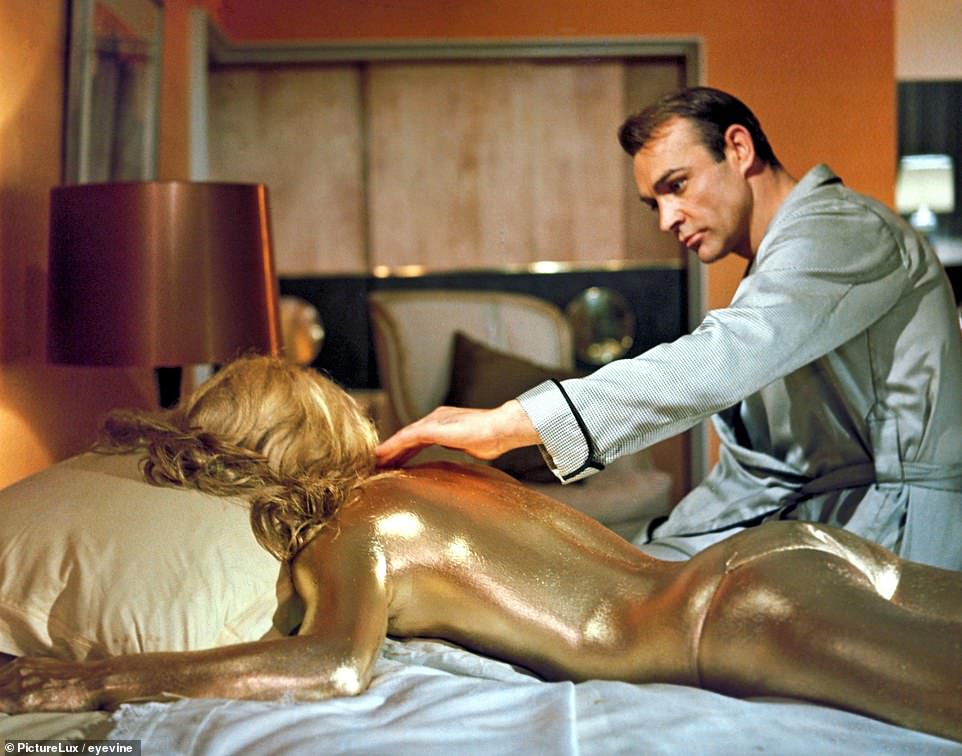 But in later years he instructed his agents to turn down all acting work and retreated into life in New Providence in the Bahamas with Micheline. According to Hollywood sources, producers always offered him ‘wheelbarrows full of cash’ to make a cameo in whatever movie they were making, but ‘he just wasn’t interested’.

Much of time in his twilight years was spent playing golf on the course at the five-star private club behind his home.

Sir Sean will be cremated in the Bahamas and a memorial service held at a later date, the venue for which has to be decided. It is not known whether his ashes will be brought back to Scotland.

His wife said: ‘We have not decided what to do. That is something we will talk about soon but he will be cremated in the Bahamas, which is what he wanted.’

Yesterday, at his home near Lilliesleaf in the Scottish Borders, the actor’s son Jason, 57, struggled to hold back tears.

He said: ‘It’s a very difficult time but already there has been a beautiful outpouring of tributes for him and that is appreciated. It’s a sad day for all who knew and loved my dad and a sad loss for all people around the world who enjoyed the wonderful gift he had as an actor.’ 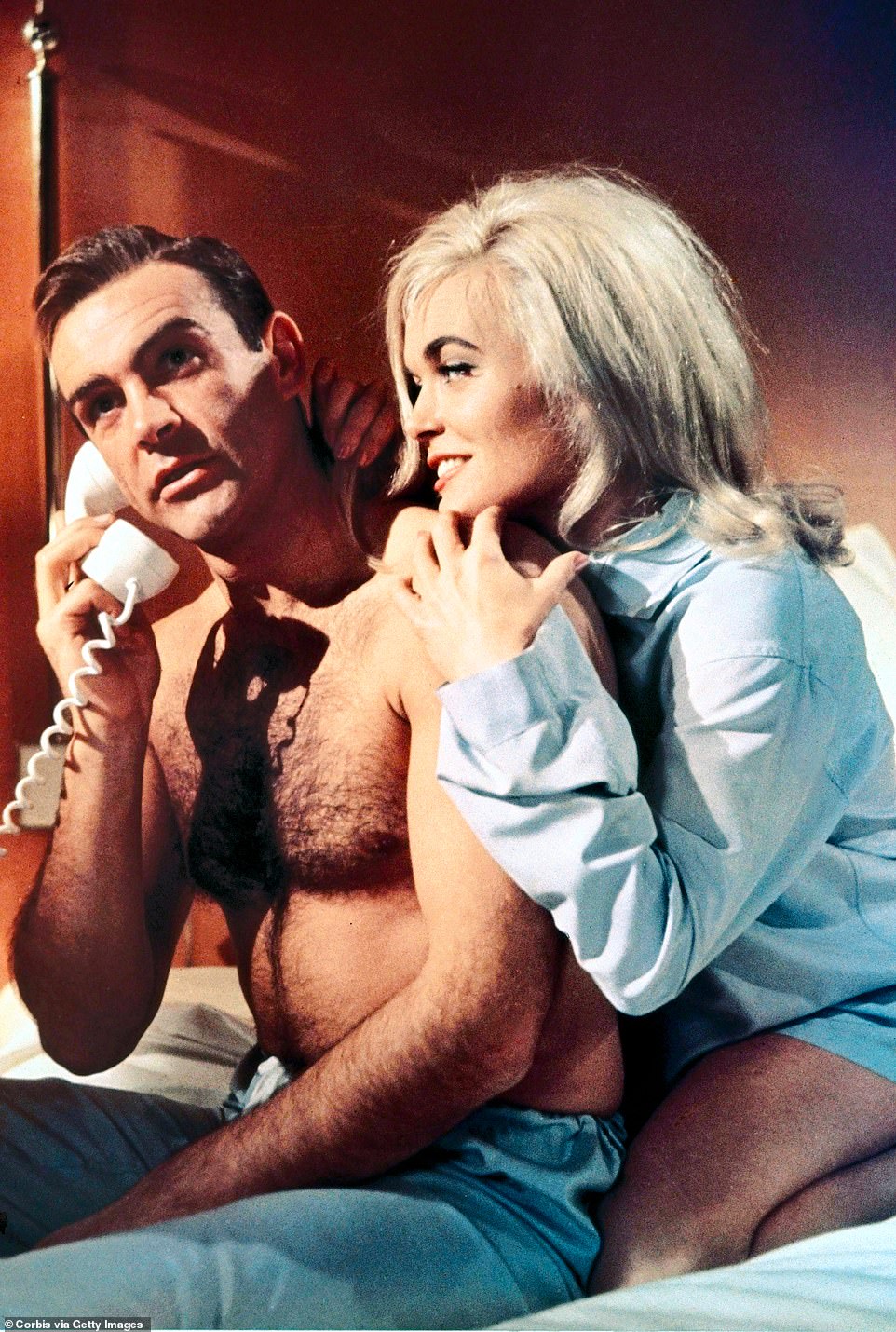 Sean Connery as 007 and actress Shriley Eaton on the set of the 1964 James Bond film, Goldfinger 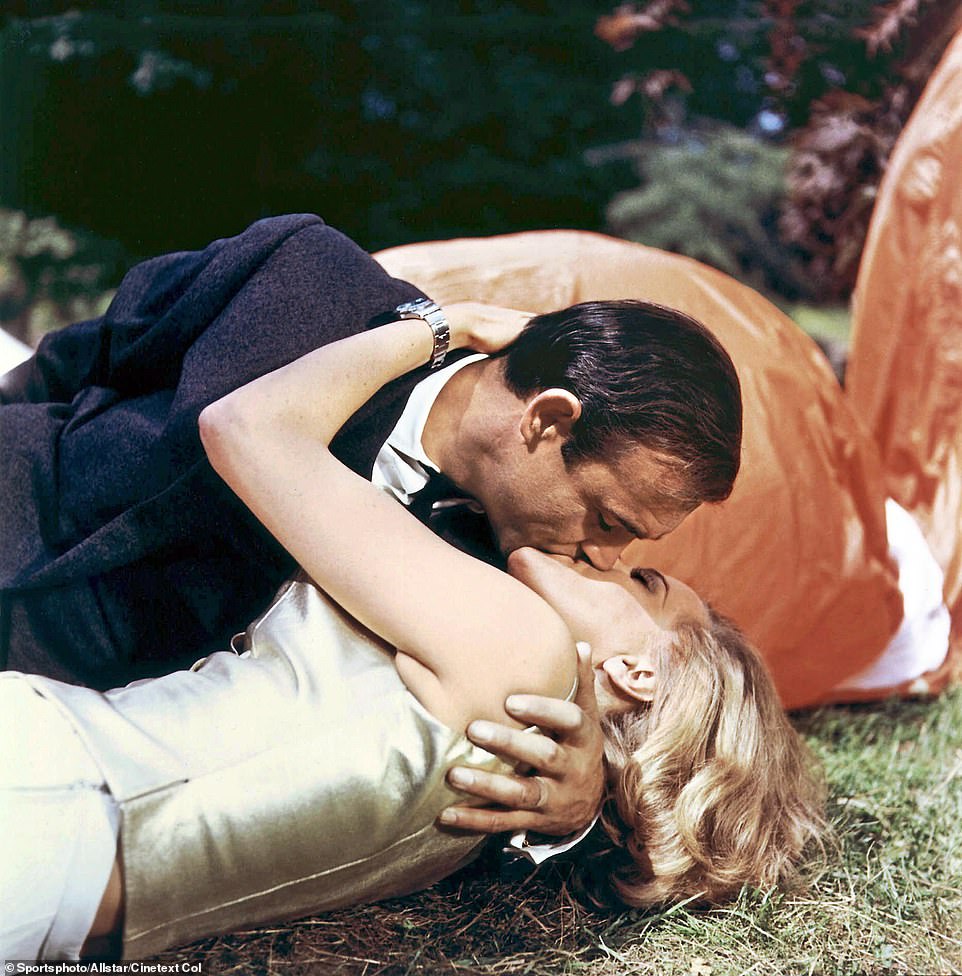 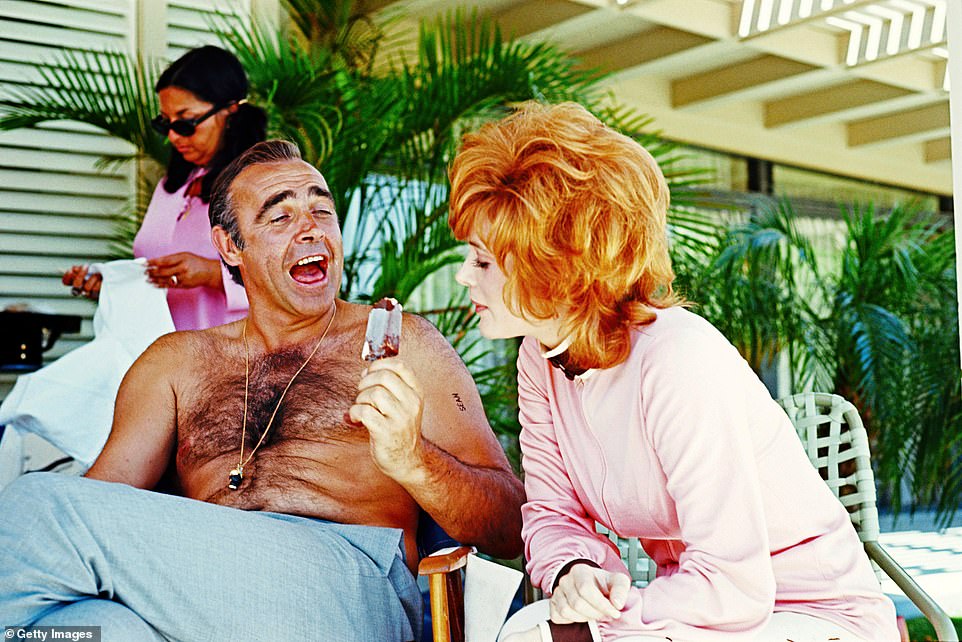 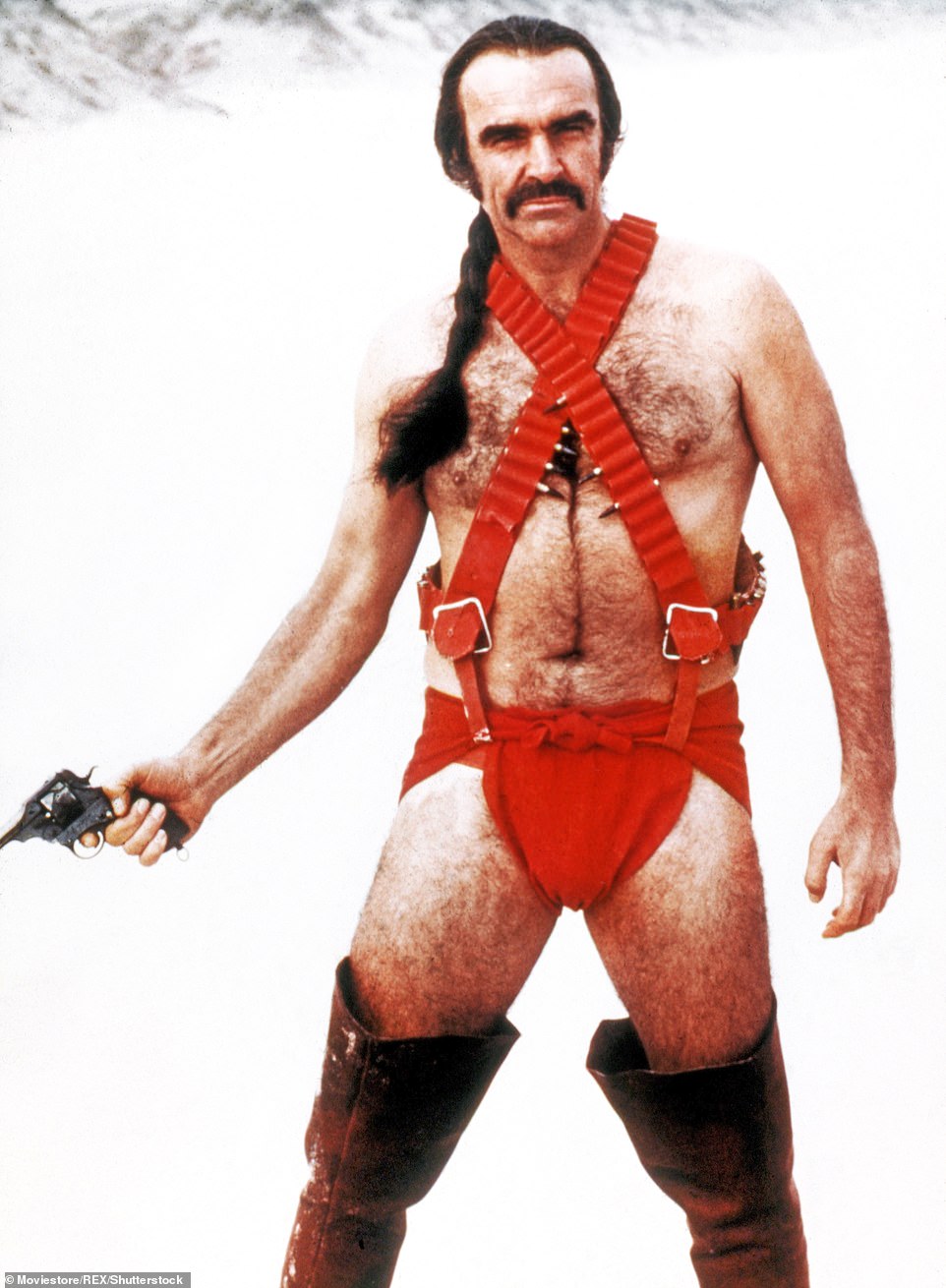 From her home in Edinburgh, Sir Sean’s sister-in-law, Elinor Connery, 82, who is married to the actor’s younger brother, Neil, said: ‘Unfortunately, Neil is very unwell at the moment. He is obviously very upset at the news of the death of his only brother. It is a very sad time for the whole family.

‘We would like to thank everyone for their thoughts and prayers at this difficult time.’

Among those paying tribute yesterday was the current Bond star Daniel Craig, who tweeted: ‘Sir Sean Connery will be remembered as Bond and so much more. He defined an era and a style.

‘The wit and charm he portrayed on screen could be measured in megawatts; he helped create the modern blockbuster.

‘He will continue to influence actors and filmmakers alike for years to come. My thoughts are with his family and loved ones. Wherever he is, I hope there is a golf course.’

The family of Sir Roger Moore, another 007 who died in 2017 aged 89, said: ‘How infinitely sad to hear the news Sir Sean Connery has passed away. He and Roger were friends for many decades and Roger always maintained Sean was the best ever James Bond.’

Perhaps the most fitting farewell, though, came from Richard Moore, the real-life head of MI6.

He tweeted: ‘My favourite Bond. No question. So sorry he’s gone. #SeanConneryRIP.’