A Playboy model looking for love on Bumble has claimed the dating app removed her profile photos because she ‘is too beautiful’.

Tahlia Paris, 24, from Los Angeles, joined the app in the hope of finding love and said she created a ‘PG’ profile that made her look like an ‘average girl’, posing snaps of herself pulling funny faces and strolling down the beach.

But instead of date requests, Tahlia claims she received a notification that Bumble moderators had removed some of her profile images.

Tahlia, who has 890,000 followers on Instagram, and runs a popular OnlyFans account where she regularly posts saucy snaps for her fans, believes it’s because she is ‘too hot’ for the dating app.

Tahlia Paris, 24, from Los Angeles, claims that dating app Bumble removed several of her profile photos (not pictured) because she is ‘too beautiful’ 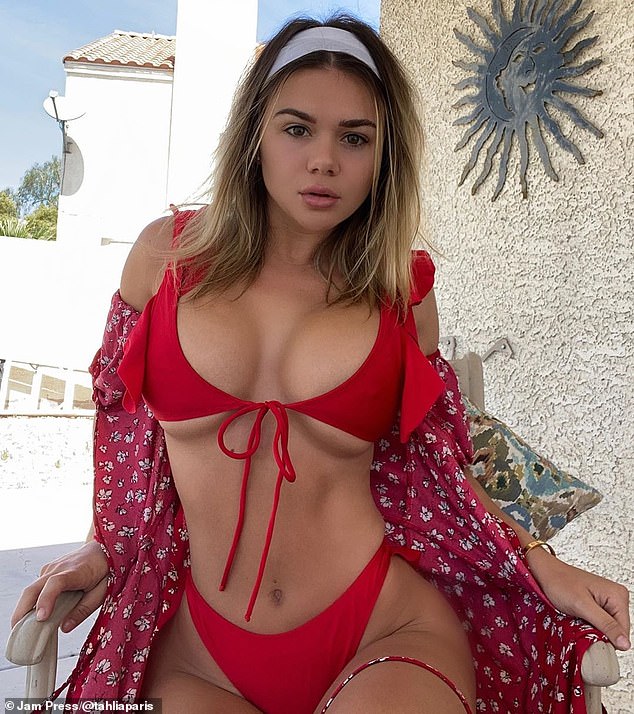 The model, who is pictured in a photo that was not included on her Bumble profile, joined the dating app after her last relationship ended when she found out her partner was married 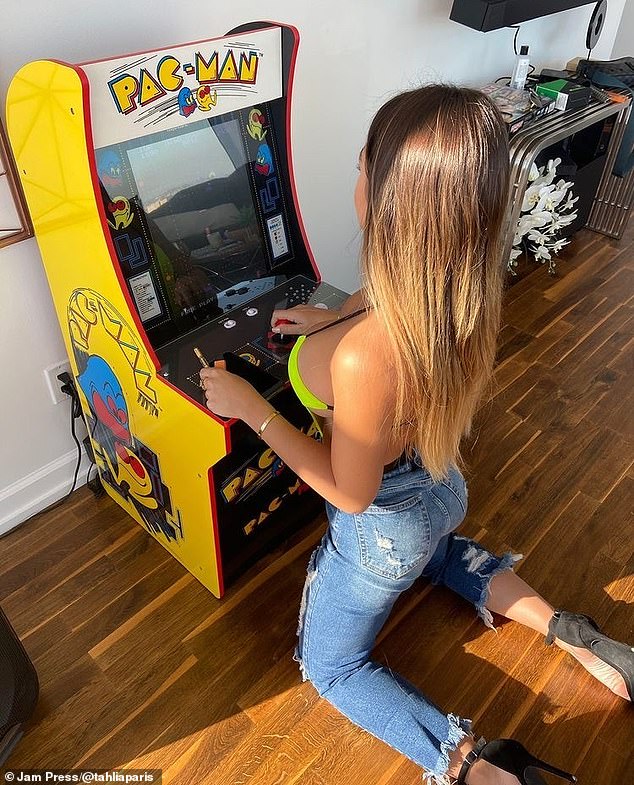 The influencer claims this shot of her playing Pac Man was one of the pictures deleted by Bumble. The app’s regulations do not allow shots of swimwear worn indoors 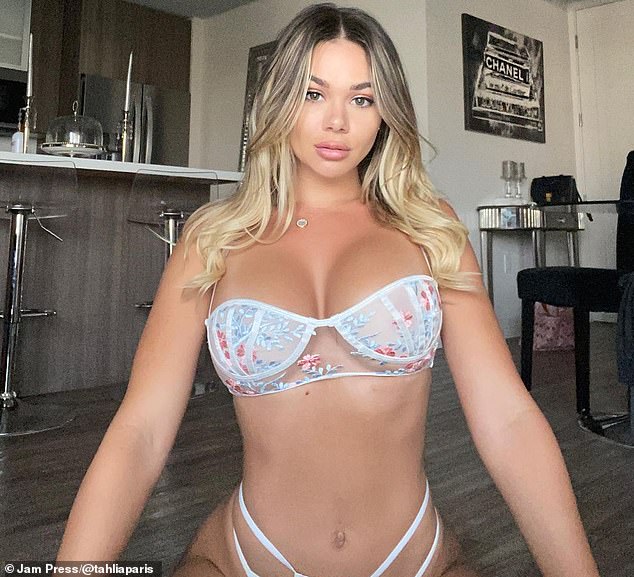 Tahlia says she purposefully tried to keep her profile ‘PG’ because she wanted to look like an ‘average girl’, and therefore didn’t include more risque shots like this lingerie snap 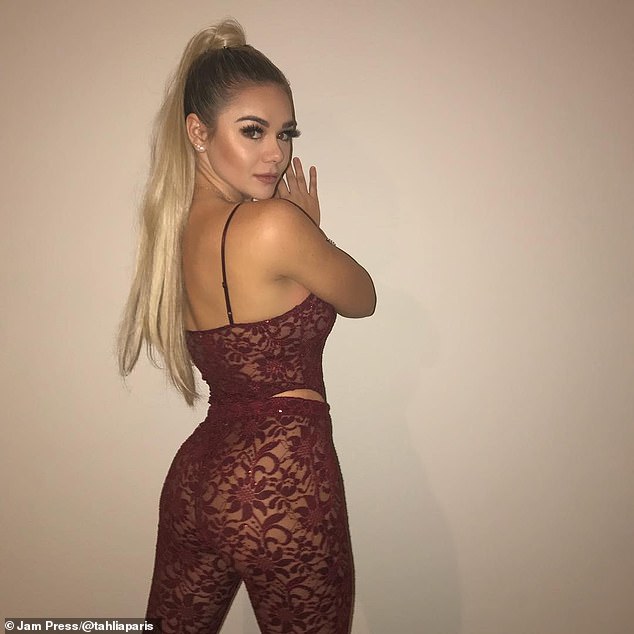 Instead of date requests, Tahlia claims she received an email from Bumble to say her photos had been removed by moderators. She insists the images did not violate app guidelines

She claims three photos were removed: one of her in a bikini on the beach, one of her playing Pac Man in a bikini top, and one red carpet snap. The bikini photo was later reinstated by Bumble, according to Tahlia.

The company said in a statement that profiles cannot include ‘shirtless bathroom mirror selfies’ or photos of people wearing ‘underwear or swimsuits’ indoors.

‘I was on the app for not even a few hours because pictures I tried posting to my profile were removed even though they were normal photos,’ said Tahlia, who also works as a DJ.

‘It happened three or four times to different pictures and Bumble only allowed one of my pictures to stay up, which was really hurting my odds in the dating app world.

‘The photos I posted very were basic. One was a selfie of myself, one was a picture a friend of mine had taken at the beach. 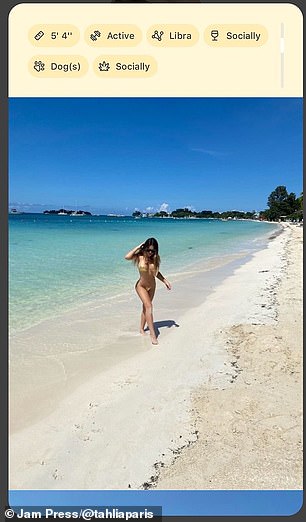 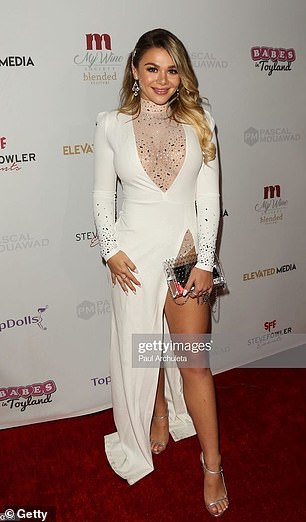 Tahlia claims these two photos were removed by Bumble. One shows Tahlia on the beach (left) and the other shows her on the red carpet for an event (right). Tahlia said Bumble later revealed the beach photograph was ‘removed in error’ and reinstated the picture 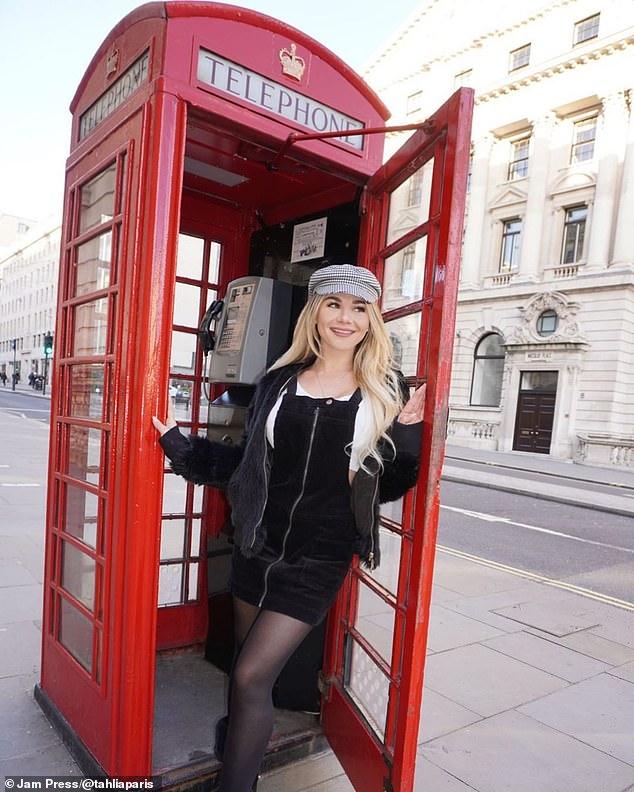 The influencer has been single for four years and was hoping that the online dating would be the solution to finding a man. Pictured, one of the photos she claims was removed by Bumble 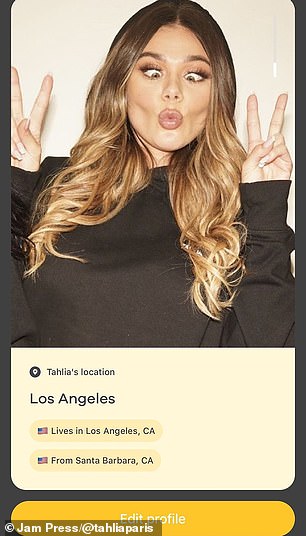 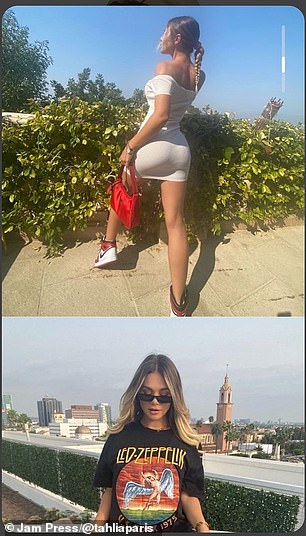 ‘I tried to keep it very PG and not model-esque at all. I wanted guys to not stop at my profile because I’m a professional model but because I was just another average girl looking to date.’

She continued: ‘I even kept my Instagram and everything private and separate from Bumble.

‘I’ve had guys in the past solely try to hook up with me because of my presence on social media.

‘When turned down, a few of their responses were like “but wait, you model for Playboy” – as if that was something that made it easier to have sex with me.’ 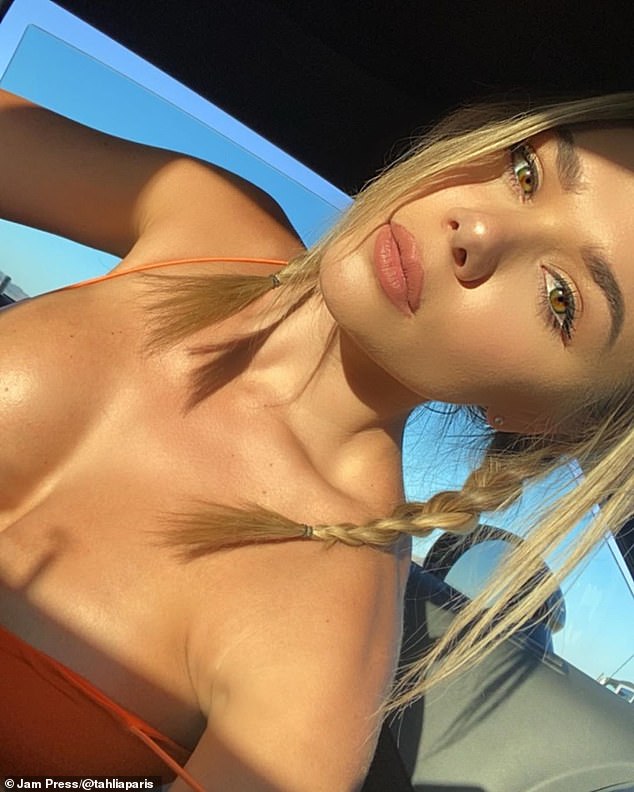 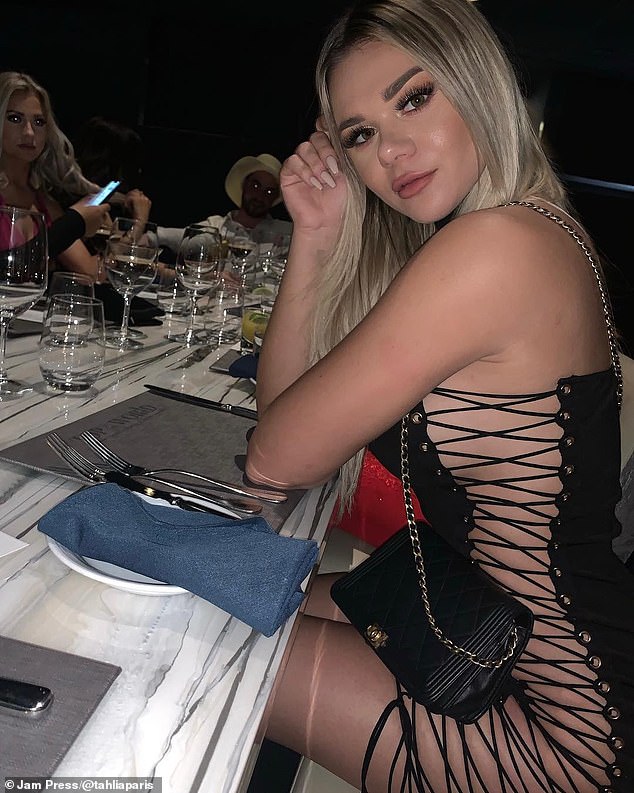 ‘I was on the app for not even a few hours because pictures I tried posting to my profile were removed even though they were normal photos,’ Tahlia (pictured), who also works as a DJ, said 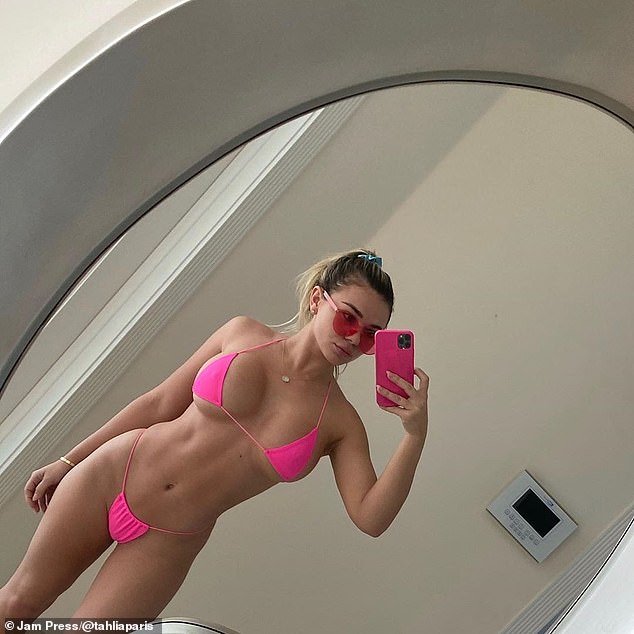 Tahlia joined Bumble after struggling to meet people due to the pandemic and was hoping to find companionship through the app.

‘In LA, everything is completely shut down due to Covid, so I thought I would have better odds finding someone to spend time with on an app rather than hoping to meet someone at the grocery store,’ she explained.

‘At first I was upset when they closed my account because why should I have to suffer because others have made fake accounts of me?

‘But at the same time I was a little relieved because online dating for the first time was a little bit nerve-wracking.’ 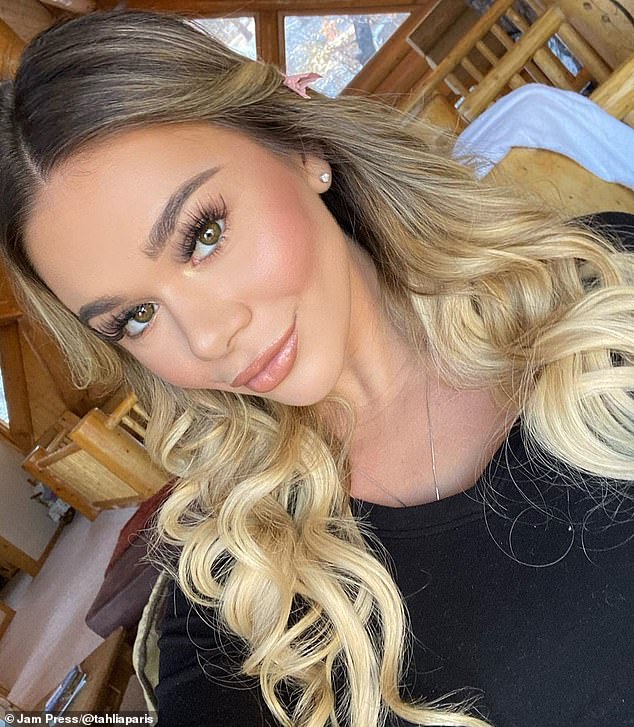 Tahlia’s Bumble account may have been real but the model has been targeted by catfishes using her pictures in the past, though not on a dating app

Tahlia’s Bumble account may have been real but the model has been targeted by catfishes using her pictures in the past, though not on a dating app.

It’s such a big problem it has even led to death threats.

‘There are several “impersonation” accounts of me all over Instagram,’ she explained. ‘One has nearly half a million followers.

‘They make their money by stealing my photos and using my name to fraudulently sell stuff online – everything from “used lingerie” to dodgy diets and workout plans.

‘When these people don’t receive the items they paid for they would email me personally with death threats, asking me to give them whatever they had ordered.’

After all she has been through during her short-lived stint on Bumble, Tahlia isn’t sure if the dating app world is for her. 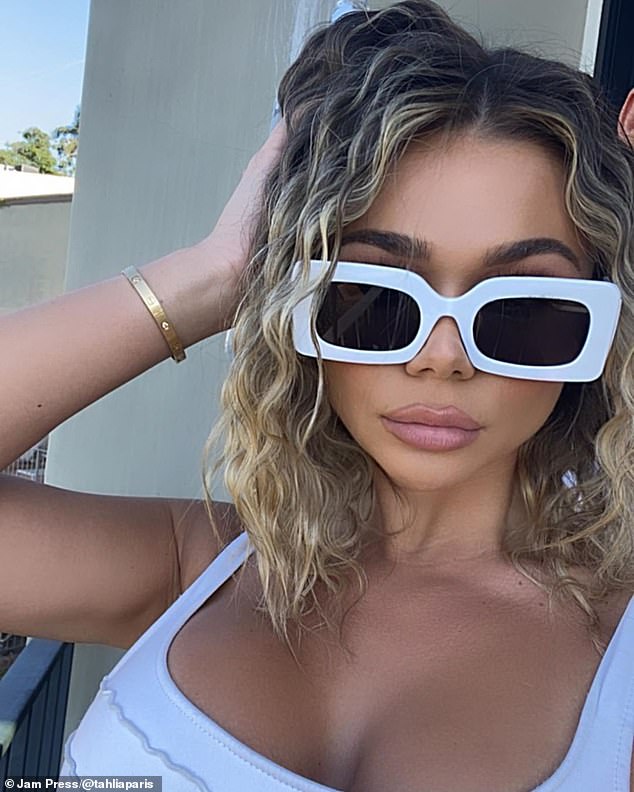 Tahlia (pictured) said: ‘The photos I posted very were basic. One was a selfie of myself, one was a picture a friend of mine had taken at the beach’

She added: ‘Online dating has never really been something I’m into but in these circumstances, I thought I’d try it and it didn’t work out. Maybe it’s for the best.

‘I would have to start all over with a new account and I’m not sure it’s worth it at this point.

‘For now I’m at a stand-still with dating sadly, but hopefully things will open soon so I can get back out into the normal dating world.’

A Bumble spokesperson commented: ‘In 2016, we banned shirtless bathroom mirror selfies in response to feedback from our Bumble community – and after our research showed that profiles including those kinds of photos were the most swiped left on. 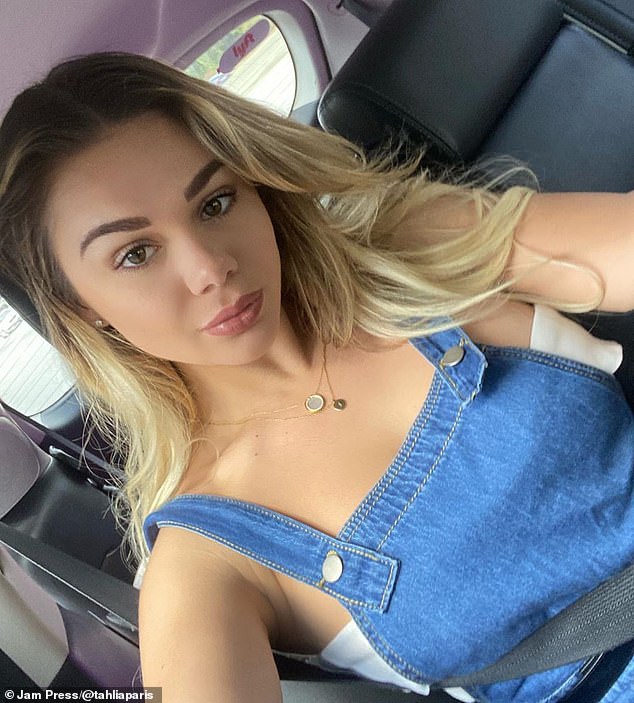 A Bumble spokesperson said: ‘In 2016, we banned shirtless bathroom mirror selfies in response to feedback from our Bumble community.’ Tahlia is pictured 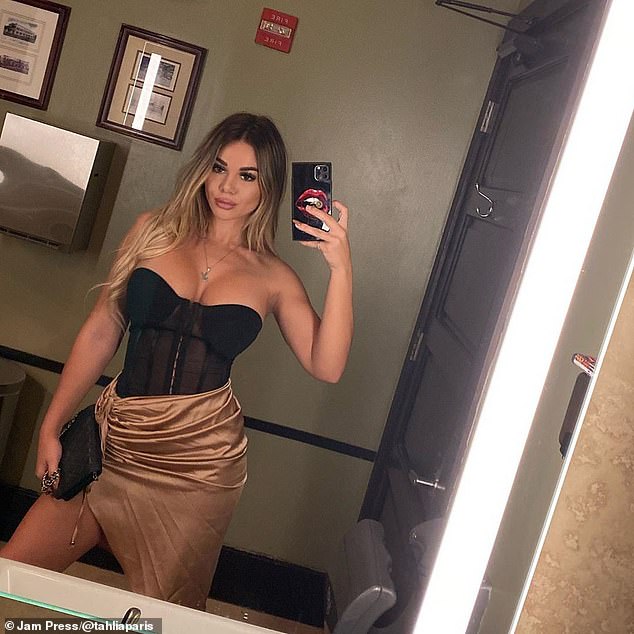 Tahlia (pictured) said: ‘Online dating has never really been something I’m into but in these circumstances, I thought I’d try it and it didn’t work out. Maybe it’s for the best’ 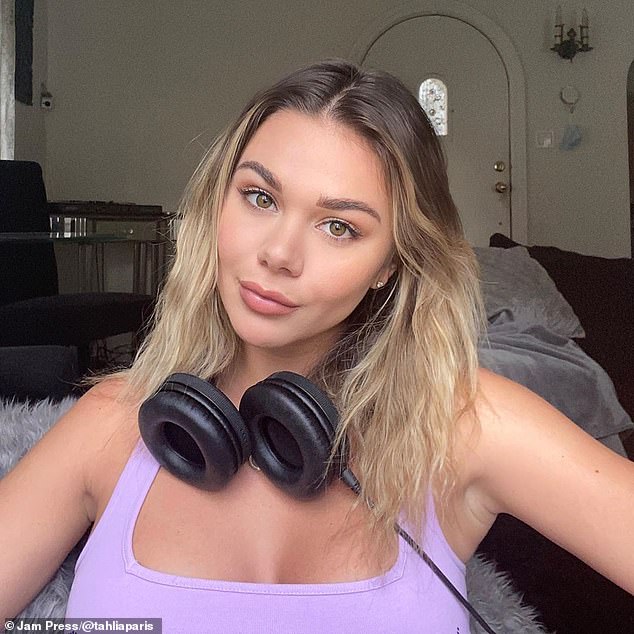 ‘As part of that overall policy, our photo guidelines prohibit photos of people indoors wearing swimsuits or underwear.

‘Swimsuit photos are acceptable if you’re outside by the pool or on the beach as you’re in a natural setting to be wearing a swimsuit.

‘In 2018, we also banned photos of guns on Bumble in response to the Parkland shooting, unless the person pictured is a member of the military or a law enforcement officer in uniform.’