Former Saturday Night Live cast member Jay Pharoah has said that he feared for his life during a recent interaction with police, comparing it to the killings of George Floyd and Ahmaud Arbery.

Pharoah said the incident occurred in April, while he was exercising in Los Angeles, and four police officers surrounded him with guns drawn, saying he matched a criminal suspect description.

‘I see an officer to the left of me, I’m not thinking about it because I’m a law abiding citizen,’ Pharoah recalled in an Instagram video posted on Friday.

‘I see him coming with guns blazing, I see him say “get on the ground, put your hands up like an airplane,”‘ he continued, saying the incident occurred near Ventura Boulevard and Corbin Avenue. 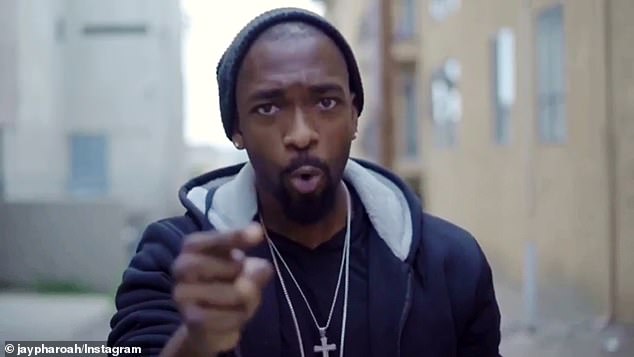 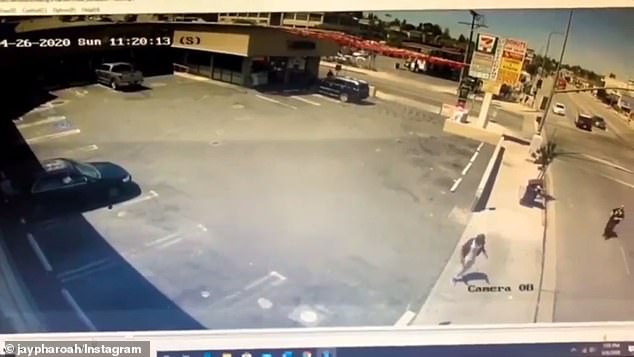 Pharoah said in an interview that he was doing interval training and was walking after a sprint, and was wearing noise-cancelling headphones at the time that left him initially confused at what was going on.

He said there was a police helicopter overhead, suggesting an active pursuit of a dangerous suspect.

At first, Pharoah said that he thought the cops were coming after someone else in the area as they approached him, but then realized that their commands were directed at him.

Surveillance video of the incident shows four officers surround Pharoah and place him in handcuffs. Pharoah says that while he was being handcuffed, one of the officers put a knee on his neck.

‘It wasn’t as long as George Floyd, but I know how that feels,’ Pharoah recalled.

He said that the officers told him he matched the description of a suspect they were seeking, ‘a black man with gray sweatpants and a gray shirt.’

‘Google right now Jay Pharoah, you will see that you made a big mistake,’ Pharoah says he told the officers 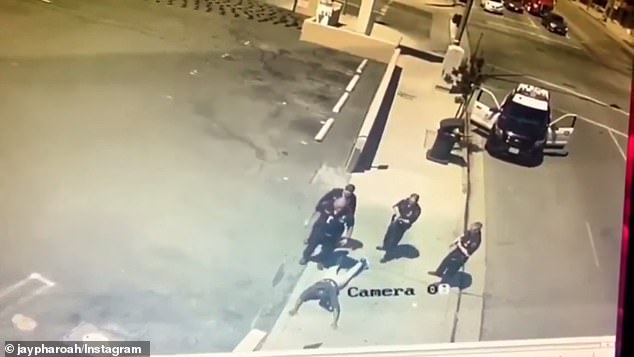 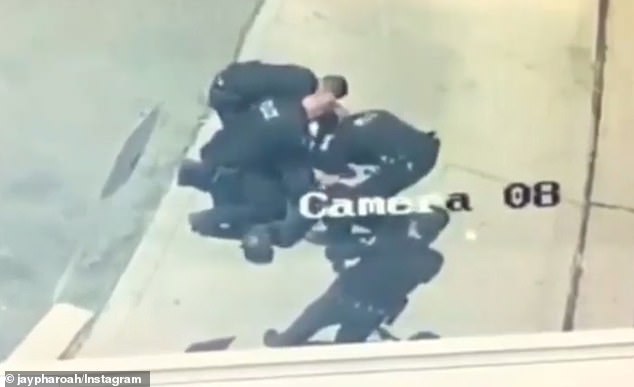 Pharoah says that while he was being handcuffed, one of the officers put a knee on his neck

He said that after a few minutes, the officers verified his identity and learned that the suspect had been apprehended elsewhere.

Pharoah said the officers apologized, and he told them, ‘Get these f’ing cuffs off me.’

He said he believes that the encounter could have easily proven fatal.

‘I could have easily been an Ahmaud Arbery or a George Floyd,’ he said, referring the the high-profile deaths in Georgia and Minneapolis. 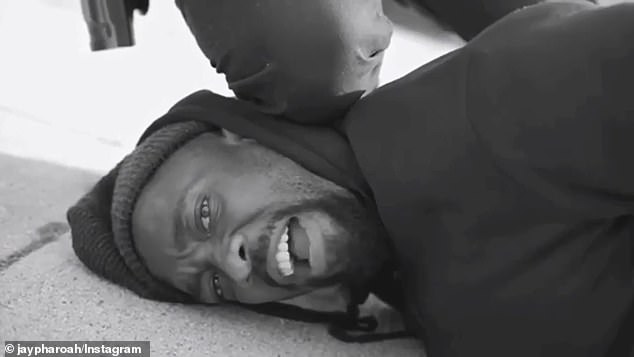 Pharoah dramatically recreated the incident for a video on Instagram, saying ‘We as a country can’t breathe anymore. We are tired, we are sick, and we are tired of it. I can’t breathe’

‘Other people can’t level with the same fears I have. Leaving the house, we should not have to fear going to the grocery store, going to get some gas, running down the street. It’s called human civility. That’s what it is. It’s about being a human,’ he said.

In his Instagram video, the actor says, ‘Be in the know. I’m Jay Pharaoh and I’m a black man in America and my life matters. Black lives always matter. They always matter.’

At the end of the Instagram post, Pharoah recreates part of the incident with a knee placed on his neck.